As nearly all commodity categories have weakened in the final quarter of 2012 and are showing (at best) volatility within a tight range in 2013, the one standout performer is iron ore — or at least the spot iron ore market in Southeast Asia.

TSI’s monthly report explains that global crude steel production rose by 5.1 percent year-on-year in November, according to the latest report from the World Steel Association. In China’s case, output was up by nearly 14 percent, compared with the same month in 2011.

Confidence in China’s economy improved in December, buoyed by encouraging signals from the new administration on urbanization and infrastructure development, while HSBC’s monthly survey of China’s manufacturing sector came in with a PMI reading of 51.5 for December, up from 50.5 in November.

The following chart from TSI illustrates that in spite of the optimism created by the new administration’s commitment to infrastructure and low-cost housing, actually the biggest gains in steel prices have been in flat rolled products consumed by manufacturing. 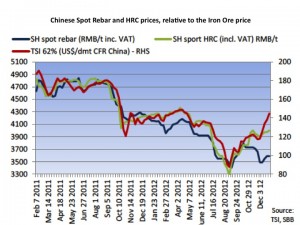 It’s no secret that iron ore prices have been rising strongly as a result of Chinese steelmakers’ demands. Inventory at Chinese ports is headed towards one month cover from two months during last year. 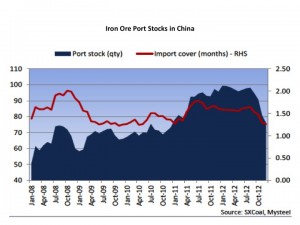 With India out of the frame (export taxes of 30% restricted Indian shipments to just 150,000 tons in November, a new low), supply has been down to Australia and Brazil.

As MetalMiner noted earlier today, a record volume of iron ore was said to be shipped out of Port Hedland in Western Australia in December, according to TSI. Almost 26 million tons were shipped from the port last month, beating the previous record of 22.8 million tons in August.

Domestic import prices in China are continuing to rise strongly, as this chart from the MetalMiner IndX℠ shows. 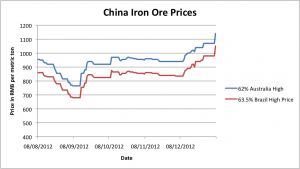 The TSI expects supply to remain tight in the run-up to the Chinese New Year in the first half of February, as mills continue to build inventory, with port stocks at relatively low levels that will keep bidding for spot cargoes pretty intense.

What This Means For Buyers

Higher spot prices will translate to higher quarterly prices in the first quarter for consumers still on such term contracts.

With the World Bank predicting Chinese growth will pick up to 8.4 percent this year on the Bank of Beijing’s commitment to continued urbanization, iron ore and steel prices, at least in Southeast Asia, appear unlikely to ease for some months to come.