Platinum is, like silver, both an investment product and an industrial metal.

In the same way, it can move out of direct linkage with gold if industrial demand is pulling or pushing the price counter to financial or political news.

Such has been the case in recent months as the platinum/gold spread has narrowed to below $100 per ounce. The narrowing has been more down to gold’s falls than platinum’s rise, it’s true, but the relative support for platinum gives some indication to where prices may go in 2013.

Platinum demand has been relatively muted; the four principal demand areas have not individually been strong these last 6 months, but neither have they weakened further over the year.

Auto demand, as the graph from Standard Bank below shows, has been tracking very close to the same levels as the previous two years, but a strong seasonal uptick in the latter part of the first quarter should add positive sentiment to the platinum price in the months to come. 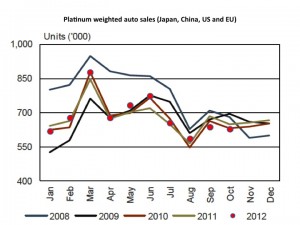 The platinum sponge discount to ingot, which has in recent weeks narrowed from around -$2.5/$1.5 to -$2/-$1, adds to the belief that industrial demand may also be improving.

Jewelry demand is heavily biased towards China, which accounts for the bulk of global platinum jewelry consumption. It tends to be price sensitive, with demand strong when prices fall towards $1,500, but weakening when they rise above $1,600, or so it has been in 2012.

Long-term demand by the investment community remains firm, if not spectacular. ETF demand remains positive with further holdings being added at a steady pace in Q4.

Lastly, futures demand remains positive, as reflected in recent CFTC data showing that NYMEX open interest remains at very high levels and that the net speculative position as a percentage of open interest still sits at 60% (this is well above the 5-year average of 51%).

The main support for prices, both short-term and long-term, comes from the supply side. At $1,600/oz, platinum is close to its cost of production, making a prolonged dip below this level unlikely.

Short-term supply disruption in South Africa is still a possibility. Anglo American has been reviewing operations at Anglo Platinum; with an expectation the firm may announce more detail of the review process in the next few weeks. The review process is said to possibly include closure of existing production.

So while the slightly more risk-on financial climate at the moment, post-fiscal cliff, is reducing support for gold, a moderate upward trend in optimism for the global economy is supportive of platinum with the added floor of a less than solid supply side.

2013 could see platinum swing above gold — now that would be a vote of confidence for the future.