The Tin Metal Market: Is It The New Copper?

Copper bulls love to point to Chinese demand and a constrained supply market to support the assertion copper prices should be higher, but in fact a far tighter supply market can be found in another base metal – tin.

The case for much higher prices can be made more readily, more logically, for tin than for any other of the leading base metals, and here’s why.

Firstly, the supply side, because that’s where the primary dynamic is coming from; Indonesia is the swing producer. Likened to Saudi Arabia’s position in the oil market, Indonesia is the world’s largest exporter.

It can be argued that, when prices crashed to below $18,000 per metric ton in the summer of last year, enabling the recovery to current levels of nearly $25,000, can largely be put down to Indonesia shutting refining capacity.

Indonesian top producer PT Timah warned in November its full-year 2012 production would fall to 29,000-30,000 tons from 38,132 tons in 2011, as it cut production to control costs. Even so, total Indonesian exports in 2012 were up 3 percent at 98,817 tons, according to Reuters, showing that even in a weak demand environment (China was slowing in 2012 and the West was little more than stagnant) the slightest restriction in supply was enough to lift prices significantly.

Now Indonesia is looking suspect for 2013; according to Wayne Bramwell of Kasbah Resources, an Australian miner with tin and gold resources under development in Morocco, Indonesia has issued new export regulations restricting the sale of refined metal with less than 99% tin.

Export licenses in Indonesia will be issued only for material of 99.9% purity or better, forcing smelters into costly upgrading, which will take time and without a higher price, force some out of business. Kasbah’s own jewel in the crown, the Achmmach Project, is to start delivering concentrate in 2015, adding much-needed supply to Asian smelters.

According to the World Bureau of Metal Statistics, tin was in deficit to the tune of 11,500 metric tons from January to November 2012. Indeed, the metal hasn’t been in surplus since 2008 when there was a slump in demand due to the global recession. As a recent BNP Paribas report illustrates this point graphically, global stocks remain low: 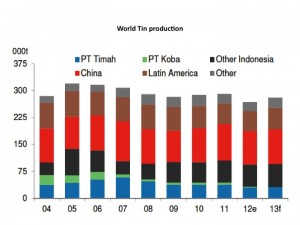 The LME currently shows 12,860 tons, less than two weeks’ supply, yet that is without almost a quarter being in the form of canceled warrants, meaning it has been earmarked from withdrawal according to Reuters.