Home | Metal Prices | The Price of Tin: It's All About Boom and Bust
Market Analysis

The Price of Tin: It's All About Boom and Bust

Well, tin has certainly been characterized by boom and bust.

When the metal price last hit an all-time high of $33,600 per ton in April 2011, China stopped importing and actually became a net exporter as volumes of tin products rose. The price then crashed in the following six months to nearly half.

The BNP Paribas report observes that what makes tin’s price performance – both in 2012 and since 2001 – all the more remarkable is that it has been achieved despite demand being relatively weak.

Tin demand fared reasonably well up until 2006-07 compared with other base metals, boosted by the migration to lead-free, high-tin-content solder for the European market.

But since then it has fallen behind, due to a drop-off in demand for consumer electronics and de-stocking, as this chart from the bank illustrates. 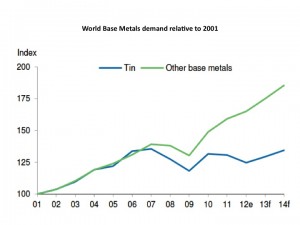 The report states that tin’s poor demand record since 2007 has both structural and cyclical causes.

Usage in chemicals (said to be 15 percent of overall demand) and several small applications has shown some growth, but tinplate and float glass (together around 20 percent) have been broadly flat. More importantly, solder use has fallen since 2007 (when it accounted for 55 percent of demand), first largely through miniaturization and thrifting, and then in 2012 due to a downturn in the consumer electronics and home appliance markets, hitting Chinese solder manufacturers hard.

Tin’s shorter-term demand prospects depend more on the health of solder’s end-use markets, and there BNP sees growth of 3.5-4.0 percent in 2013, applying further pressure on the constrained supply market. Much of this will come from the Asian electronics market, particularly China.

So if Indonesia controls the bottom of the market, then China can be said to control the top. Even so, many observers are expecting further strength in the tin price this year.

Edward Meir, senior commodities analyst with INTL FCStone, is quoted in Resource Investing News as saying he could see the price up to $28,000 per ton this year, but with the average around $23,300 per ton.

Wayne Bramwell is more bullish, saying the price could be above $30,000 by the time his project comes on-stream in 2015. With the supply market as tight as it is, it would not take much of a global recovery to prove him right.