Nickel, Unloved and In Surplus

Could the nickel market be going the same way as the aluminum and zinc market?

By that I mean becoming a game for the financiers to turn a small profit by playing the forward LME curve. At present, the forward curve is not strong enough, as this graph from the LME shows. 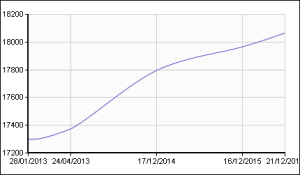 Cash to December 2014, a typical timeframe for such a deal, shows only a 3% return. However, physical premiums are rising and the market surplus is increasing, suggesting that if physical demand does not pick up this year, we could find nickel coming to the attention of those already deeply involved in the aluminum and zinc markets doing exactly the same thing with nickel.

Relatively speaking, nickel has attractions over the cheaper base metals; certainly storage, a key cost component, is a smaller percentage of the metal price than for either of the other metals.

According to the World Bureau of Metal Statistics, the nickel market was in surplus during the January-to-November period in 2012, with production exceeding apparent demand by 93,000 metric tons. This compares to a deficit in 2011, by the WBMS’ estimation, of 31,000 tons.

Mine production rose by 125,000 tons year-on-year, while apparent demand rose only 81,000 tons – although “apparent” does not differentiate between unreported stock changes and true end-user consumption, so some of this apparent consumption may well be increases in inventory. Certainly LME stocks have increased, by 46,000 tons in November 2012 compared to November 2011, and since then have continued to rise.

In a recent report, Standard Bank noted headline nickel stocks have increased steadily since June 2012 and are now some 70,000 tons higher than the November 2011 lows. The underlying market dynamics are poor; end-user demand with any pick up in physical delivery premiums being more about stock movements than fundamental demand.

For much of 2012 and into 2013, consumers have been living hand-to-mouth running lean inventory levels, a situation that is unlikely to change until they feel more confident about stainless demand. Both Japan and Europe have been leading the malaise, although recent improvements in flash PMI numbers in China and the US suggest the top two global economies may be starting 2013 on a firmer footing – not the case for much of 2012.

Meanwhile, that forward curve is the one to watch. If the spread widens, the door may open for stock and finance plays to become viable; and if that happens, physical delivery premiums could pick up as they have for aluminum, in spite of the market being in surplus.