In the first part of a three-part article, we look at the current state of the zinc market and an intriguing, potentially game-changing new application for the metal (check back in for that tomorrow).

Firstly the zinc market overall: the World Bureau of Metal Statistics reports that the zinc market was in surplus for January to November last year by 175,000 tons, as compared to a surplus of 552,000 tons recorded for the whole of the previous year.

HSBC suggests the market ended 2012 with a small deficit as metal headed into exchange warehouses. Inventory rose in the order of 347,000 tons, almost all of which was into LME warehouses, with LME stocks representing 64 percent of the global total according to the WBMS. 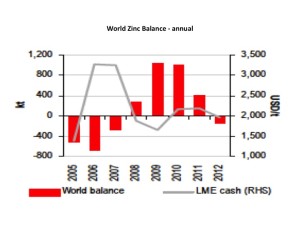 According to HSBC, despite a low average zinc price of only US $1,950/ton in 2012, concentrate supply reached another peak as mine production grew 5 percent year-on-year. However, instead of turning this into refined metal concentrate, stockpiles grew by about 600,000 tons as low treatment charges made production unprofitable and forced Chinese smelters to temporarily cut production.

Refined production thus stayed flat, creating the refined metal deficit as the year went on. The bank believes mine production should continue at current levels in 2013, as production remains profitable due to high by-product credits (particularly gold, silver and copper) with only a moderate production growth of +2.2 percent due to several mine closures (Brunswick and Perseverance). 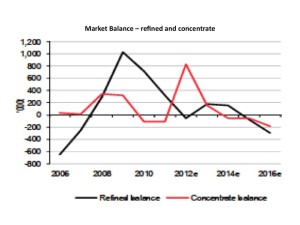 The increase in refined metal production in 2013, encouraged by better TCs for refiners, will result in the market slipping back into surplus in 2013, in the region of 172,000 tons, according to HSBC, with the following year slightly lower at 157,000 tons as global demand picks up.

The bank sees an average price for the year at $2,129 per ton, but much depends on the level of investor (rather than end-user) demand and to what extent smelters are incentivized to turn plentiful concentrate supply into refined metal.

If the market remains in the current deficit position, the bank could see significant upside risk to the price, potentially up to $2,500 per metric ton.