Copper demand in 2012 was poor. The downturn in Europe, which has led into a probable overall recession from the end of the year, combined with weak US demand and a weak third quarter in China, saw global copper growth of about 2.2%, by the bank’s estimates.

Chinese real demand is not expected to take off in 2013. The Chinese market is well served with inventory, although as we have identified in previous articles, some of this may be locked up in financing plays of China’s own design, facilitating grey market borrowing.

But even so, refined metal supply is strong on the basis of increased smelter refining, since better TCs have been available in recent months.

We have seen in the past that speculative inventory build is likely to occur if copper prices drop to $7,000-7,500 per ton, but the greatest risk to demand HSBC sees as coming from North America and Europe, encouraging the bank to reduce its global demand growth forecast for 2013 from 5.5% to 4.3%. Even so, growth in excess of 5% would be required to dent the 200,000-ton surplus that HSBC sees for this year. 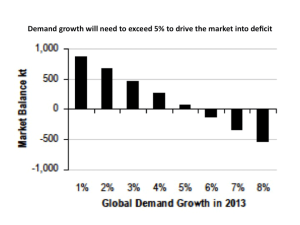 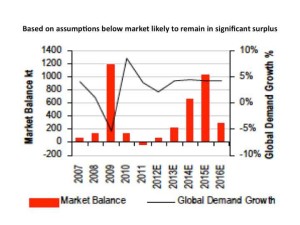 As a result, prices are expected to decline in 2014-2015, although Chinese strategic buying should place a floor at about US$ 7,000 per ton.

The final graph (below) shows global stocks as a ratio to consumption, and although we started off by exploring Standard Bank’s speculation that copper may become another financial play like aluminum, the drop in global stocks, as illustrated by the graph, suggests that’s unlikely. However, HSBC’s graph runs only up to the end of 2012 and as previous peaks and troughs show, the recent adherence to the average is as much an exception as it is the rule. 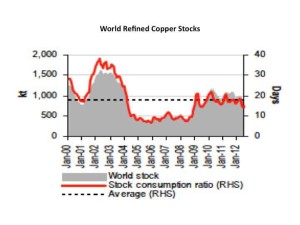 Much will depend on demand; supply is almost certain to rise strongly from this year onwards, and Chinese demand looks like it will pick up. Although much of the infrastructure investment is going into sectors that are not heavily copper-demanding – nearly 50% of copper consumption in China is in the power industry; transport and construction make up less than 20% – industrial and consumer activity is picking up and looks like it will be solid in 2013-14.

The unknown is the US and Europe. As the current copper price tells us, sentiment is certainly more positive in that area than it was six months ago – but by no means a dead certainty.

PREVIOUS POST:
What Copper Contango Tells Us About the Metal's Supply Situation
NEXT POST:
3-Month Price of Steel Billet Declines 5.1%