What Copper Contango Tells Us About the Metal's Supply Situation

The copper market is in a state of change – maybe not a pivotal moment, but certainly nearly all analysts agree it is moving from a period of deficit to a period of surplus.

That will have a number of different effects on the copper market and on prices, some of which we will look to consider here.

As Andrew Keen, an analyst with HSBC, is quoted as saying in a Reuters article recently: “Copper, perennially described as fundamentally tight, actually finished 2012 posting a gain in inventories. This market remains balanced in our view, and this is enough to keep prices high when sentiment is good.”

In the same note, HSBC raised its forecast for the average spot price in 2013 to US $8,000 per metric ton from $7,500 but more in response to the current price levels than a change in the bank’s view of the fundamentals.

The World Bureau of Metal Statistics reported the copper market was in deficit during the January to November 2012 period by 250,000 tons, but that reported stocks rose by 23,400 tons during November, a trend that has continued in January, reversing outflows seen in 2012.

Indeed, Standard Bank even speculated in a recent note to clients whether copper could become a financing play like aluminum and zinc.

Observing that in one day last week, 31,400 tons was delivered into an LME warehouse in Antwerp, largely locking that metal up from end-user consumption by long exit queues, the bank prompted the question: what would it take to make this a trend?

Let’s Do the Copper Contango

For aluminum and zinc, a global surplus has resulted in a strong contango on the LME, enabling forward-price premiums to be sufficiently high to facilitate spot purchase and forward sale at a profit. For copper premiums, certainly shorter-dated spreads would not have to ease much to provide a similar window.

What is required is a sufficient freely available metal surplus to allow forward premiums to rise.

For a market that has traditionally been constrained by poor supply, the aforementioned notion has been a bit far-fetched up to now, but HSBC in their Quarterly Review suggest the supply market is finally changing.

Net growth in concentrate or mine supply has struggled to reach 2 percent for the past seven years in spite of strong copper prices, which one would expect would have driven substantial new mine and expansion investment. But the bank believes new mines such as Oyu Tolgoi (expected to add 75,000 tons) and Xstrata’s Southern Peru operations (expected to add 90,000 tons) – combined with growth at Chile’s Escondida of 75,000 tons and Grasberg at 90,000 tons – will change the supply landscape over the next two years.

Even taking a pessimistic 7% disruption rate – production not meeting projections – the bank projects a period of strong production growth in 2014-2015, as the graph below shows. 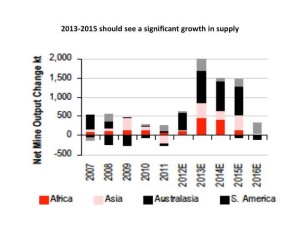