The latest PMI numbers support the improvement in both sentiment and activity – at least among Chinese consumers – with reports that China’s services industry grew at the fastest pace since August, following gains in retailing and construction.

According to the National Bureau of Statistics, the non-manufacturing PMI survey rose to 56.2 in January, up by 0.1 from the previous month. This figure follows last week’s PMI for the manufacturing sector however, which eased to 50.4 in January, below expectations.

The recovery in China therefore appears patchy. Manufacturing has some bright spots, but others such as automotive are lackluster, as the following graph shows: 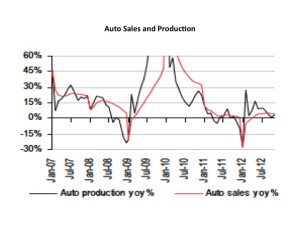 Production of air-conditioners and home appliances are up, moving out of negative territory in the second half of last year and that suggesting consumer confidence is improving.

Money supply, though, has been relatively steady at 13.8 percent year-on-year in 2012 over 2011, according to PBC statistics as quoted in the China Daily. At 13.8 percent, it is still way above growth in GDP (at about 8 percent), but within Beijing’s target for M2 of 14 percent.

Even so, some economists are already warning it could lead to inflation and the need to clamp back down on lending. Although it seems unlikely in the short term with an easing in commodity prices and plenty of capacity in the economy, inflation is likely to be pretty benign this year.

So while China’s improving construction market should contribute to supporting prices, the lack of strength across the economy as a whole is likely to undermine any significant upward movement in demand or prices such as occurred in 2006 and 2009.