Some had written off China’s housing market last year, saying the super-cycle, fueled in part by the housing market, was over and China was more likely to experience a hard landing than a bounce-back.

Meanwhile, commodity bulls clung to the statistics, saying 150 million farm workers heading towards the cities would fuel the construction sector for years to come.

Well, it would seem the bulls may have been closer to the truth than the bears.

The China Daily reported this month that land sales figures in China’s 10 key cities almost tripled in the first month of 2013, fueled by property developers’ improved cash flow and expectations of a stronger real estate market this year.

Moreover, the area of land sold in those cities last month was 26 million square meters, an increase of 77 percent year-on-year. The 10 cities include Beijing, Shanghai, Guangzhou, Shenzhen and Tianjin.

The two sets of figures also showed that the price of the land grew at a much faster rate. New home prices in China rose 1 percent in January, the paper reported, the eighth straight month-on-month increase since June.

The average new-home price in 100 Chinese cities increased to 9,812 yuan per square meter ($146/square foot), according to sources quoted. According to a report by the World Bank, China’s large-scale urbanization and related development projects are likely to drive GDP growth to 8.4 percent in 2013.

HSBC recently released a range of measures for the Chinese economy that show the trend lines turning upwards in the latter half of 2012, with an improvement in both residential and commercial sectors. 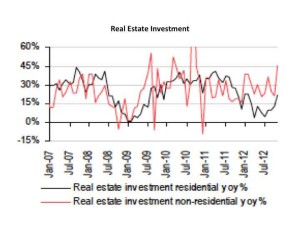