Global steel production, however, was probably flat in 2012 with contraction in Europe countered by growth in China.

Chinese domestic production of iron ore barely grew at all in 2012, according to TSI, as imports surged another 11 percent in December year-on-year, bringing the total for 2012 to 9 percent higher than 2011 as a whole. 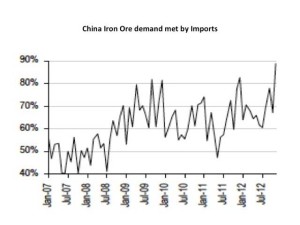 This graph from HSBC illustrates the increasing reliance on imports to meet supply, as Chinese dependency on imports rose to 68 percent of its annual demand. Compare this to 2008, when it was below 50 percent.

This growing reliance on imports is partly behind estimations that marginal cost support exists at about US $130/ton, but HSBC estimates the level may in fact be a lot lower, closer indeed to $90-100/ton.

Certainly the Australian and Brazilian ‘Big Three’ can profitably supply at that level, and as supply grows faster than demand, their willingness to chase the market will increase.

Most observers are betting on a seasonally strong first quarter this year, but HSBC is calling for caution later in the year. Although growth prospects in China are positive, they are mixed across the economy.

In addition, demand in North America and Europe is not expected to pick up significantly this year, particularly with major economies in Europe like France entering a period of negative growth.

After the doom and gloom of 2011-12, 2013 has started much more optimistically, and with it prices across a range of commodities. However, we should not forget the burden of debt and unemployment many major economies are still struggling under – which will continue to temper current optimism as the year unfolds.