Iron Ore Strong – But for How Long?

The iron ore market has been remarkably strong the last few months, with prices rebounding some 50 percent above their recent lows in mid-2012, according to HSBC’s Quarterly Review.

Demand has been strong, driven by re-stocking at the steel mills and the addition of new production capacity in China, the largest seaborne iron ore market and producer of 46.3 percent of global output.

New capacity continues to be added, with more than 50 million tons of steel-and-iron-making capacity commissioned in 2012. Even so, capacity utilization is not keeping pace, with rates falling to between 76-80% on average in 2012, according to TSI’s Monthly Iron Ore Review.

Consumption levels are supported by a run-down in port stocks. 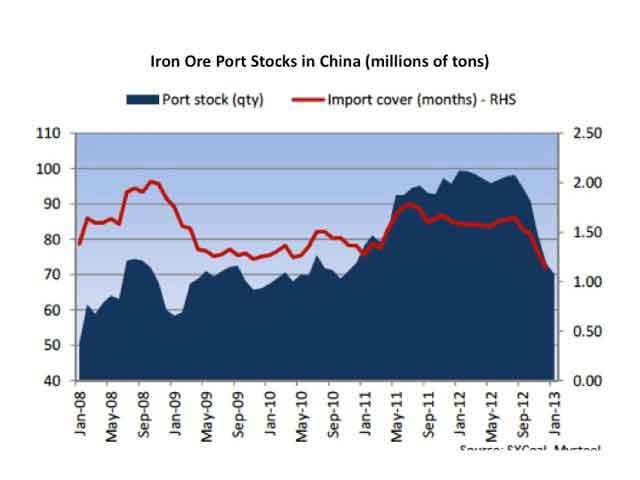 In a graph (above) from TSI, port inventory built up during 2011 to 2012 can be seen to have been sharply depleted in Q4 2012. Although re-stocking ahead of Chinese New Year is now complete, it is expected demand will pick up again towards the end of the month when workers drift back to construction sites and factories, and the weather improves.

In a recent article, we highlighted the resurgence of confidence in both the residential and commercial construction market, which, it is expected, will translate into increased construction activity in the first half of the year.

Rising iron ore prices have in turn stimulated increased buying, as consumers have sought to position themselves ahead of further price rises; a process that can quickly reverse if prices fall.

In the medium to longer-term, HSBC continues to see significant structural upside to Chinese steel demand due to ongoing urbanization – particularly away from developed costal areas – noting that installed steel capacity in China represents just 4 tons per capita, compared to 14 tons in the US and 18 tons in Japan.

However, shorter-term the bank sees finished steel production in a cyclical slowing phase with new capacity additions in 2013 expected to be limited by low utilization levels among existing producers and poor profitability.