Lead: Surplus or Deficit? Which Way Next? 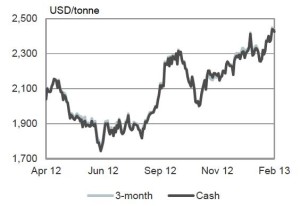 The lead market showed a small surplus for much of last year, according to the World Bureau of Metal Statistics, reporting a 5,500-metric-ton surplus from January to October last year.

But that was down from a 22,400-ton surplus the year before as a whole.

Standard Bank, however, in a recent report looked at where most of the increase in demand has come from in recent years (namely China) to better understand where the market may be going this year and next.

As the graph above shows, the price has risen strongly since the summer even though global demand and supply growth have been flat.

So where to next?

Chinese production bounced back in 2012 from a dire year in 2011, when smelters were closed over poisoning fears.

Production growth for the year appeared to be rising strongly in the January-to-October period, but the final figures suggest the previous 11.2% growth figure should be revised downwards towards almost zero. Stock increased by 45,000 tons and net imports were negligible at 5,000 tons.

This in spite of lead-acid battery production rising 27.3%, according to data provided by the bank, mostly as a result of a 26.3% rise in e-bike production and a 4.3% rise in vehicle sales.

Data released last week and reported in China Car Times reported January production grew by 51.2% to 1.96 million vehicles over January 2012 figures. Vehicle sales grew to 2.3 million vehicles, an increase of 46.4% over January 2012 and up 12.4% over December’s figures. It should be noted January this year had five more days than 2012 due to the later New Year, but nevertheless the auto market is clearly buoyant and helping to drive lead consumption.

Where Are Prices of Lead Headed?

Although debate flares about some of the Chinese lead production numbers’ authenticity, rises in SHFE inventory suggest a surplus was still produced. Chinese refined lead prices were depressed last year, according to Standard Bank, in stark contrast to the LME where tightness caused by stock financing, high levels of canceled warrants, warehouse exit queues and regional scrap shortages all contributed to a strong rally in prices on the LME.

Export taxes in China have tended to limit exports and so partially isolate China from global prices; good for lead consumers, but painful for lead refiners, many of whom are said to have run at a loss last year.

Regional Asia demand growth is expected to be strong in 2013, around 10-15%, whereas supply growth is put slightly lower at 8-10%. Prices are therefore expected to rise later this year once current inventories are run down.

While a rise in imports is not in the cards, rising Chinese consumption will be supportive for lead prices globally and the bank is expecting prices to average $2,338 per metric ton this year and $2,525 next year.