Home | Inventory Stock Levels | Is the Zinc Market Getting Ahead of Itself…?
Market Analysis

Is the Zinc Market Getting Ahead of Itself…?

Zinc is not an easy market to read at present.

On the face of it, the rising LME price and reports from HSBC of 2012 ending on a supply deficit suggests a market responding to a supply shortage. Not only have absolute prices risen, but so have premiums charged for physical delivery of metal – clearly a sign of a market short of available metal.

Zinc consumption rose in 2012, but at the slowest rate for several years, even in Asia, the source of over 60 percent of global zinc demand in 2012. 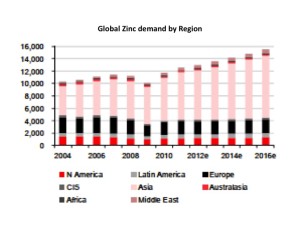 As this graph from HSBC shows, most of the world’s growth in demand has come from Asia since the credit crisis, and of that, the majority has come from China.

But the Chinese zinc market has been in a state of turmoil during 2012, and how it comes out of it in 2013 will be a key issue for prices and metal availability going forward. 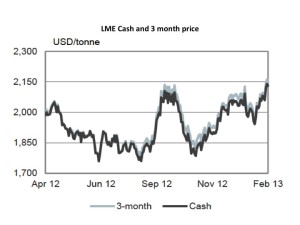 Despite a low average zinc price of only $1,950/ton in 2012, concentrate supply reached another peak as mine production grew 5 percent year on year, according to a recent HSBC report.

However, instead of turning this into refined metal concentrate, stockpiles grew by some 600,000 tons as low treatment charges (TCs) made production unprofitable and forced Chinese smelters to temporarily cut production. Refined production thus stayed flat, as the graph below by the bank illustrates. 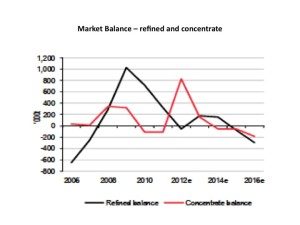 Mine supply remains profitable and although some older mines are coming to the end of their life, such as Brunswick and Providence, new mine start-up and expansion is expected to still see a modest rise in concentrate supply in 2013.

The uncertainty is around the level of TCs the refiners can obtain – too low and the market will continue to be under-supplied with refined metal, but HSBC expects TCs to rise in the order of 20 percent to around $230/metric ton, sufficient to trigger restarts and growth in refined output of about 5.9 percent over 2012.

Demand is expected to be supported by two drivers.

What are they? And what’s the zinc price forecast? Check Part Two.