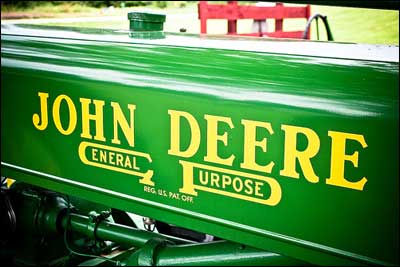 He had taken a grand detour from the cast-iron plows of his time to plows made of highly polished steel and a properly shaped mouldboard. The origin of Deere’s idea isn’t exactly known: the design’s inspiration either came from the observation of polished needles for sewing leather or of pitchfork tines moving through hay and soil. Deere’s version of the plow proved better suited to handle the composition of the prairie.

In 1837, Deere made a polished steel plow in his blacksmith shop, which met with acclaim and soon became a boon to farmers working the Midwest soil. The next year, blacksmith Deere transformed himself into a manufacturer. In 1848, Deere moved to Moline, Illinois, where Deere & Company is headquartered.

I once worked at an interaction design agency that did eCommerce work for Deere & Company. On the office walls were posted web design concepts revealing a healthy spattering of the client’s flagship colors: green with a fine trim of yellow. Another pattern was the tremendous showcase of agricultural machinery, used by farmers, on a wide range of soil, throughout the world. Over the decades, Deere & Company has released generations of equipment, like their tractor. 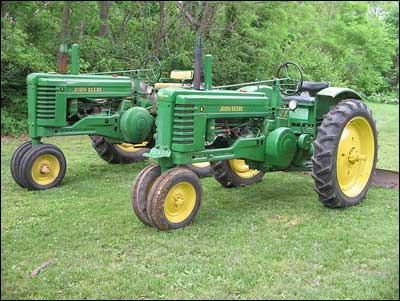 Deere equipment is synonymous with the global pride of agriculture and farmland, as well as construction and forestry. Not only large-scale agricultural efforts are addressed; the Deere portfolio of products also embraces lawn mowing. The products are rugged and resilient, as embodied in the company’s tagline: “Nothing Runs Like a Deere.”