BHP Billiton has nominated a replacement for retiring Chief Executive Marius Kloppers, and that says much about the direction that BHP, its Chairman Jac Nasser and the firm’s principal shareholders, see the industry heading over the next five to 10 years.

We wrote recently on John Authers’ predictions in the FT about an end to the commodities super cycle, about how metals in particular could be in for a prolonged period of price stagnation, and about how oil was perhaps the only exception to the decline of the China-driven super cycle.

Although the article didn’t make much of it, we would also exempt agricultural products like corn and wheat; population growth and water scarcity will continue to drive prices in those sectors. But metals, the theory goes, are entering a period of more stability, benefiting from significant new mine investment in the last 5-10 years and slower, steadier, less raw-material-intensive growth in China.

The internal appointment of Andrew Mackenzie as BHP’s new CEO could be seen as supporting that move towards consolidating existing investments –maximizing returns rather than making grand acquisitions or expansion plans – and focusing more on oil production in the years ahead.

RELATED: Learn how buying custom aluminum, steel or other metal shapes can reduce your spend – register for our FREE webinar on March 7, 2013.

As this FT article explains, Mackenzie, who spent 22 years at BP before moving to Rio Tinto in 2004 and then to BHP in 2008, has an academic record few senior executives in the resources industry can match. He also has, from his wide experience at BP, a deep understanding of oil and gas.

As a scientist he published more than 50 research papers and was acknowledged by the Geological Survey for his “extraordinary and long-lasting contributions” to understanding of “petroleum generation, migration and entrapment,” the paper said. His focus at BHP is said to be on costs and capital discipline, issues he’s familiar with from his time running BP’s low-margin chemical business and which are critically important given the weaker outlook for commodity prices, the company said.

BHP Billiton is most widely known as an iron ore and coking coal producer (principally in Australia, and with extensive copper resources in Chile), but the firm is actually a more diversified resources company than some give it credit for, as this graph from the FT shows. 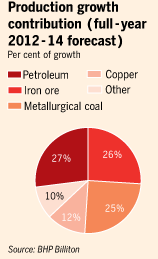 But even so, the firm is well placed to expand further into the oil sector, particularly unconventional shale bed production, in the years ahead.

What Does This Say for Conventional Metal Mining?

It will remain a core part of BHP’s portfolio, but consolidation and maximising the returns from existing assets will almost certainly be the order going forward.

It is unlikely we will see BHP engaged in major mining acquisition activity or, indeed, major mine expansions, particularly in Australia where the strong Aussie dollar and rising resource taxes are putting returns under pressure.

Don’t wait to reduce your metal spend – learn about and register for our FREE webinar on March 7, 2013.