Home | Macroeconomics | Europe: The Frog in the Slow-Boiling Pot
Commentary

Europe: The Frog in the Slow-Boiling Pot

The markets seem to be risk-on this year – equities are up and while no one is forecasting a rapid return to growth in Europe, many are saying the crisis is over, not least of them Mario Draghi of the European Central Bank.

But according to Eurostat, Q4 2012 saw the Eurozone economy shrink by a massive 0.6 percent. Germany hit the average, posting a contraction of 0.6 percent, Italy 0.9 per cent and Portugal 1.8 percent.

Adding to the pain, the Italian statistics agency confirmed the country’s growth for 2012 as a whole at -2.2 percent.

In a recent WSJ article, European member states were likened to the “boiling frog” allegory: If you put a frog in scalding water, it said, it will jump out. But if you place it in cold water and slowly raise the heat, it will stay put, eventually being boiled to death.

The member states of Europe are gradually being boiled to death.

The risk is that the very fabric of Greek society could start disintegrating under such sustained pressure.

These charts from the Financial Times illustrate why the markets think the problems are behind us. 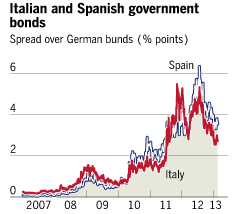 As the paper explains, the best indicator of revived confidence is the decline in interest-rate spreads between sovereign bonds of vulnerable countries and German Bunds.

Italian and Spanish spreads have been brought to the relatively low levels of 278 and 362 basis points, respectively.

This is a phenomenal turnaround and has removed the pressure on stricken states from paying excessive levels of interest on their debt, but at the same time member states are consigned to a limbo world of negative growth and rising unemployment with no sign of an improvement for years to come.

How long will societies put up with this? We conclude in Part Two.