Aluminum Production Rising Globally – What This Means For Prices

A recent article in Reuters by Andy Home paints a rather depressing picture of the aluminum market – if you are a producer.

But if you are a consumer, some would argue it appears much rosier.

The article essentially details rising production around the world and only slowly rising demand. The result of that could be stable prices for some years to come, underpinned by the cost of production and financing deals soaking up excess production.

We have been used to reports of rising Chinese production with modest cutbacks in the West, but what we have seen in recent months is rising production in the West in addition to China. True, global run rates dropped in January, but the previous three months had seen a steady rise with the IAI forecasting smelter capacity outside China to rise by 5.5 percent this year and by another 3.7 percent next year.

That represents the addition of around 2.5 million tons annualized over the two-year period, according to the article. The growth this year is expected to come primarily from the Gulf region (up 23 percent) and non-China Asia (up 14 percent).

The first hot metal was produced in December at the 740,000-ton-per-year Ma’aden/Alcoa integrated smelter/alumina project in Saudi Arabia, with ramp up over the next two years. This will help take Middle East production to 5.4 million tons by 2015, more than double the production from 2009 of 2.4 million tons.

Meanwhile Rusal, which made much noise about rationalizing capacity (and indeed is gradually closing production at older, less efficient smelters in the western part of Russia), is at the same time raising production at lower-cost, larger Siberian smelters.

In China, new capacity continues to be added in the lower-cost northwest provinces with aluminum production growing by 11 percent last year; and a similar rate of expansion is expected this year, according to Yao Xizhi, senior analyst at state research house Antaike as quoted by Reuters.

Primary metal is held in check by a hefty 15% export tax, a barrier that is unlikely to be removed as Beijing sensibly does not want to export energy in the form of low-value, energy-subsidized primary aluminum. But semis exports are rising, as this graph from HSBC shows. 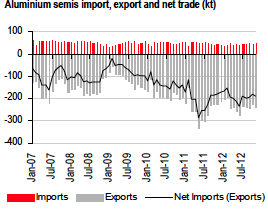