China: On Course to Become the World's Top Oil Importer

In a recent Commodities Note, Reuters detailed how the Paris-based International Energy Agency (IEA) is changing the way it records and reports China’s crude and refined oil products consumption as a result of a growing realization that the data used to date has been at best misleading, and often downright wrong.

Measuring China’s oil consumption was not a particularly important process 10 years ago, but now the country is ranked only behind the US as an importer of oil. Indeed, depending on the reliability of the data, it could soon become the largest importer, as a recent article explains.

* Get in on our aluminum webinar later today – 12:00 PM PST/2:00 PM CST/3:00 PM EST – the latest aluminum market outlook and more from speakers with Sapa Group and Kaiser Aluminum! 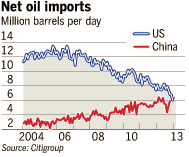 The US has been the world’s largest importer of oil since the 1970s with profound ramifications for global politics, wealth flows and more.  If, as expected, the US gradually takes more oil from domestic sources, with the growth coming from unconventional sources such as shale oil, the importance of the Middle East, for example, will become less than it has been in the past.

US domestic oil production has surged by some 800,000 barrels per day and US oil majors are now exporting record quantities of refined oil products to Latin America and Africa. Imports from the Middle East have remained relatively steady, with the hit on imports falling more on Nigeria and Angola.

China, on the other hand, has seen imports rise even as domestic refining capacity has risen faster. There is much uncertainty around real Chinese consumption, even among Chinese state agencies. This is not deliberate obscuration; official recording does not cover all of the refiners in China and they only provide percentage changes from an unspecified starting point, making the process not much better than guess work.

If refinery runs are higher than believed in the West, it could be due to greater consumption or it could be greater storage – both crude and refined product storage capability has increased significantly in recent years. What is clear is that the oil markets are becoming increasingly important to China’s security and economic health, so it is safe to assume the country will gradually assert its influence where it sees its greatest exposure or opportunities.

As the US ramps down shipments from West Africa, China is likely to step in, seeking both economic and political influence to secure its position. Indeed the US-China shift is simply the largest example of a shift that is going on across the developed and developing world.