When you think of ferrochrome, you traditionally think of South Africa.

Indeed, power supply problems in South Africa have been a major source of volatility for FeCr prices over the last few years, as the state power utility Eskom has struggled to provide enough electricity for industrial and residential users.

Ten years ago, over half the world’s FeCr came from South Africa, but since then Kazakhstan, India and China have all risen in prominence, with China moving into top spot last year, as this graph from HSBC shows. 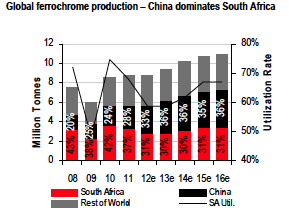 South Africa continues to face power problems; currently Eskom is engaged in a power buy-back agreement with FeCr producers resulting in the probable loss of about 100,000 tons of production, according to an HSBC metals & mining survey, as Xstrata–Merafe closes at least five of its 20 furnaces.

Even if this cutback is reversed in the second half of 2013, South Africa’s expensive winter tariffs will then kick in, further impacting utilizations rates.

Meanwhile, China is importing record amounts of chrome ore, the precursor to ferrochrome, for its own rapidly expanding FeCr smelting industry. As a result, China is now a larger producer of FeCr than South Africa and expansion plans will ensure the country contributes a significant proportion of an expected 6.4% global rise in FeCr production.

While the bank expects South African FeCr production capacity to increase a mere 2.8% this year, China’s is expected to increase 13.7%. Following supply problems in recent years, several new investments will be adding capacity for some time to come; in 2014 the bank expects global supply to increase a further 9.5% owing to additional production from major projects such as Xstrata’s Lion (said to be 137,000 tons), ENRC’s Aktobe (at 117,000 tons) and one from Outokumpu (with 131,000 tons).

Some 85% of FeCr production is consumed by the stainless steel industry, so the extent to which the market can absorb this new production depends largely on the health of the stainless industry.

What’s the demand picture like? Continued in Part Two.