First-quarter demand is expected to be relatively strong on the back of re-stocking in China and Europe, but it is not before 2014 that global growth is expected to pick up strongly, particularly in emerging markets with stainless consumption of FeCr driving demand growth.

The bank is bullish about both stainless and FeCr demand, saying they expect global stainless steel production to increase by 3.7% this year, followed by a 5.2% increase in 2014. They project this as translating into a ferrochrome demand growth of +3.7% in 2013 and +8.6% in 2014.

In the longer run, HSBC expects stainless production – and therefore FeCr demand – to surge through the next five years. 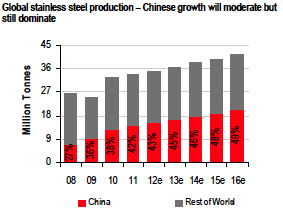 With so much new supply, we would expect the market to be in surplus (at least for a while, before demand catches up) and as a result, prices to weaken.

Not surprisingly, HSBC agrees, suggesting prices of US$ 1.25/lb for Q1 this year, already up from US$ 1.10/lb in Q4 of last year, will be supported later this year by supply disruptions in South Africa.

However, a marginal surplus of about 69,000 tons by year-end will help prices to weaken in 2014 as the new projects come on-stream. Contract prices could then weaken to around US$ 1.15/lb in 2014 and US$1.17/lb in 2015, but remain supported by a planned 16% power cost increase in South Africa and strong global stainless steel demand from rising GDP and re-stocking.

Not until 2016 does the bank see prices driven higher than current levels, predicting US$ 1.30/lb by that time.