Home | Macroeconomics | The World According to ExxonMobil in 2040
Commentary

The World According to ExxonMobil in 2040

Crystal ball-gazing is often a welcome distraction from a slow or dull market, but it serves a useful purpose too, particularly for firms with long design-to-market cycles or looking to make long-term investments to position their product mix into the future.

So a report by the world’s largest energy company, ExxonMobil, titled “The Outlook for Energy: A View to 2040,” deserves at least a passing review, backed as it is by some of the industry’s most well-resourced analysts.

Not surprisingly, the report states growth in energy demand will come from emerging markets.

A combination of moves away from basic energy-intensive industries and greater efficiencies derived from technology and fuel sources will lead energy demand in OECD mature markets falling even as GDP growth continues to grow over the period. 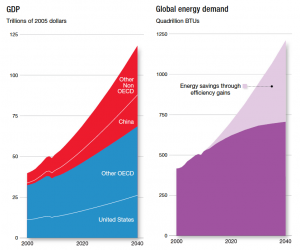 Improvements in energy efficiency, in production but particularly in consumption, will greatly mitigate the rise in demand that would otherwise be the case, pointing out the tremendous opportunities for firms and industries catering to this sector.

Growth in non-OECD emerging markets will rise 65% compared to 2010 due to growing prosperity, expanding economies and rising populations. Indeed, population growth is one of the most intriguing dynamics of the next 30 years, with most of the rise coming in Asia and Africa. 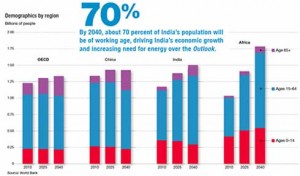 China’s working-age population will actually peak in about 2025 and decline thereafter as the one-child policy feeds through into the working population. India, on the other hand, will continue to experience population growth, becoming the most populous country in the world by 2030, as today’s global population of 7 billion becomes 9 billion by 2040.

Energy demand is expected to evolve over this period as well as increase by some 50% from 2010 levels. Oil will remain the primary energy source, but natural gas will replace coal as the second-largest source of energy, and a switch to natural gas for electricity generation will lower carbon emissions in the process.