Bearing in mind the rising proportion coming from emerging markets, it is no surprise that ExxonMobil says industrial production, particularly of raw materials such as steel, cement, plastics and chemicals will drive energy growth of about 30 percent, and that transportation, particularly of light and heavy duty vehicles, will drive energy demand growth of 45 percent. 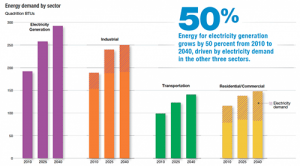 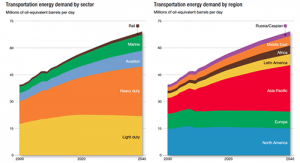 Much of this growth will be in Asia, Africa and the Middle East with transportation efficiencies helping to offset rises in demand in North America and Europe, even as the per unit of GDP energy demands in mature markets declines. 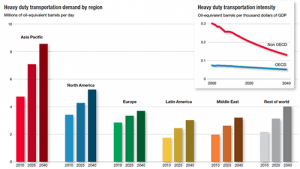 Diesel will be the largest beneficiary of growth in transportation demand, the world’s largest oil company believes, with continued high capital cost and range restrictions hindering the uptake of hybrid and electric vehicles even through to 2030. 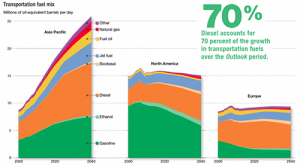 Already, internal combustion energy efficiencies are more than mitigating the gradual reduction in upfront vehicle costs, while extending the range advantage of conventional autos over new technologies. Only by 2030-40 will hybrids really make a significant dent in the uptake of internal combustion power plants.

Global industrial energy demand is set to continue strongly as emerging markets mature, urbanize and rise in prosperity. The rate of rise and point at which economies mature, though, will differ due to their starting points and demographic changes. 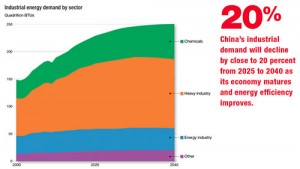 ExxonMobil believes China, the world’s second-largest consumer of energy and for the last 10 years the source of much of global demand for metals, energy and raw materials, is set to decline as its demographics change and its economy matures.

To be continued in Part Three.

PREVIOUS POST:
The Highest-Paying Jobs in the Steel Industry
NEXT POST:
Will the World Be Able to Provide Energy for 9 Billion People?