Home | Commodities | Will the World Be Able to Provide Energy for 9 Billion People?
Commentary

Will the World Be Able to Provide Energy for 9 Billion People?

Continued from Part Two. Quoting the ExxonMobil report, “The Outlook for Energy: A View to 2040,” over the next 30 years, (energy) demand (will) shift from China toward India and other expanding industrial areas, such as Southeast Asia, the Middle East and Africa.

Global electricity demand is expected to grow by 85 percent through 2040, but with the growth coming largely from non-OECD emerging markets. Where OECD markets may see growth of some 25 percent, increased urbanization in countries such as China and India will double demand in China and quadruple demand in India by 2040.

Fuel use will vary by region, though with nuclear and renewables providing a larger share in emerging markets than in the OECD.

As someone who has been through several “peak oil” scares over the years, the question springs to mind: will the world be able to provide the energy for 9 billion people by 2040, particularly in view of Exxon’s bullish predictions on GDP and consumption growth?

Taking the oil giant at their word, it would seem the answer will be ‘yes,’ although we aren’t privy to the details of “from where” the following chart suggests oil and liquids supply from current conventional sources will remain much the same, but growth will be from a number of areas, with shale oil providing only a part of it. 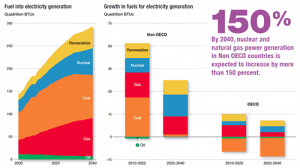 So can we make any deductions from this as to metals demand during this period?