India: Set for Slowest Growth in a Decade

In the first of two articles on the India market, one short-term, one long-term, we take a look at the failure that is India’s current position.

Democracy is both India’s pride and its curse. Pride that a population of over 1.2 billion has maintained a solid and free democracy for over fifty years is rightly a source of national pride reflective of the tolerance and maturity of its peoples.

Curse because the consensus government that India enjoys as a result of its democracy denies the country the decisive and clearly focused management that characterizes an autocratic regime like China.

Many may argue with these sentiments, but the relative growth rates of the two most populous countries says it all.

While China’s growth has slowed to 7.8% from double-digit levels, India’s has all but stalled from an average over the last decade that should have been similar to China’s, given relative populations and levels of education, as this graph of percentage change shows.

According to Reuters, growth in India is now set to fall to its lowest level in a decade during this financial year following a sharp cutback in capital expenditure last year.

True, industrial production picked up to 2.4% in January, with some observers making encouraging noises, but the reality is there is little sign of a broad recovery to support a return to higher growth levels. Automotive is cutting output in the face of dismal sales with the market contracting by about a quarter during February compared to a year ago, according to the article.

The sharp slowdown in industrial investment has hit demand for trucks and semis most severely, with monthly commercial vehicle sales said to be down in February by more than one-third compared to last year. India’s figures contrast with China, the world’s biggest auto market, where passenger vehicle sales rose nearly 20% year-on-year in the first two months of 2013, according to the China Association of Automobile Manufacturers.

Folks blame the high cost of borrowing, but the underlying cause is a failure of government to reform the business regulatory environment and enable investment in infrastructure and growth. Elevated corporate debt is also a problem, as a sample of 10 of India’s largest industrial groups chosen by Credit Suisse showed net debt of about $100 billion last year, up roughly five times since 2007. Many firms are looking at asset sales to raise cash rather than making capital investments.

India’s GDP is set to grow by only 4.5 percent this year, as the following graph shows. 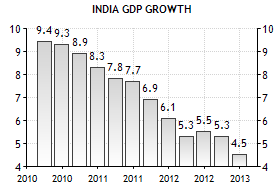 Little is expected to change this side of next year’s elections, where the outcome is still wide open. With coalition government the norm in India, one part will have to make massive gains in order to carry a sufficiently strong mandate for sweeping reforms, but at least some are paying lip service to the need for change.

In our upcoming second article, we will look at what the future could hold for India and how, with a favorable political tailwind, India could become the fastest-growing major economy in the world in decades to come.