In a recent post, we looked at the challenges facing India today as it tackles slowing growth and investment.

But we should not allow ourselves to discount India by overly focusing on too short of a time horizon.

The country has achieved much in the last 10 years, with growth at more than double the average achieved in the previous four decades of isolation and socialist misadventure.

A recent presentation by HSBC paints an even more encouraging picture of India in the decades to come, suggesting it will be outperforming even China before the middle of the century as India’s strong demographic profile trumps China’s contracting one.

The main thrust of HSBC’s presentation, though, was not so much an India vs. China comparison as an OECD vs. Emerging Markets comparison.

The argument there being that mature OECD markets are not going through a temporary cyclical period of slow growth, only for growth to pick up in another year or two; the bank’s position is that anemic mature-market GDP growth will be a permanent feature and that global growth will be almost entirely driven by emerging markets in the decades to come.

Indeed, the argument goes, this has been the case for the last 10 years, with growth consistently underperforming and inflation consistently exceeding expectations in OECD markets, as this graph shows. 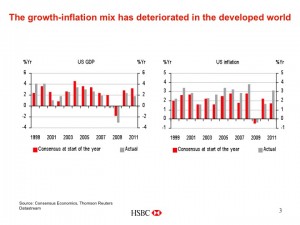 The combined effect of which has been a gradual erosion of wealth for all but the very highest earners in Western countries and the accumulation of both state and personal debt.

The reasons the bank gives for this change in prospects and underlying why it is long-term, not cyclical, is their belief the problems are structural. Massive debt levels and social liabilities, neither of which can be eradicated in any viable scenario, burden Western or mature markets. 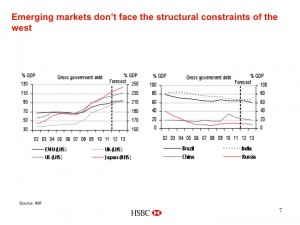 A few OECD markets still have economically favorable demographics – the US being the most obvious – but the UK also shows strong population growth, both due to immigrants and their birthrates. Even so, the trend of recent years with global GDP growth being powered by emerging markets will only accelerate as rising middle classes in these countries create huge internal markets. 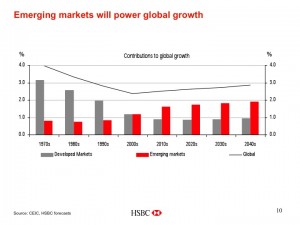 By 2050 the bank believes there will be a new world order – the US will still be the world’s largest economy, but many of the OECD countries below them will have made way for rising emerging markets, as the graph below illustrates. 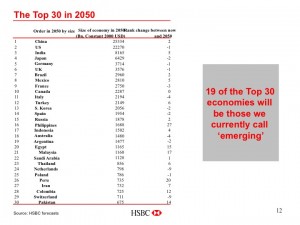 The outstanding winner in this process will prove, the bank believes, to be India.

Why? We conclude in Part Two.