Over the next 30 years, India will become a huge market for Western products as a rising middle class numbering in the hundreds of millions emerges.

The UN agrees, saying up to 80 percent of the world’s middle classes will live in developing countries by 2030, according to a United Nations report published recently.

A combination of strong demographic profile coupled with a number of advantages outlined below will power a long-term trend of above-global-average GDP growth.

Half the world’s under-age-25s are said to live in India, a young population with strong entrepreneurial instincts, good levels of education, increasingly using English as a first language, the rule of law, freedom of speech and an improving record on IP protection.

The main barrier to growth will be structural reforms, exactly the challenge that has faced the economy in the last few years. Dismantling of the state’s role in the economy, removal of subsidies, simplifying red tape and resolving political conflicts between state and federal government are all required. 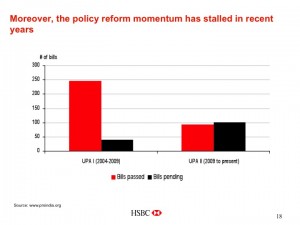 Reforms in the previous five-year plan ushered in rapid growth up to near double-digit levels, but the failure of the current administration to push through legislation has choked off investment in much-needed infrastructure such that the country is sorely behind plan on a range of key investments such as roads, railways and electric power (below): 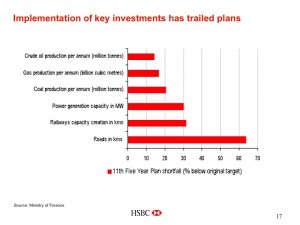 The challenge is considerable, but the prize is immense.

India has the opportunity to lift itself to the top table, but as we have seen in Europe and recently in the US, politicians have the ability to take even the most promising situation and make it worse.