As a bear market is said to be a 20-percent fall from its high, gold can be said to be a bear market, even when prices subsequently recovered to $1,505.20 later in the day they are still 21.7 percent below the peak.

Over the weekend, the slump has continued, with the Sydney Morning Herald reporting this morning that spot gold dropped as much as 3.9 percent to $1,425.75 an ounce today and was at $1,433.15 in Singapore. 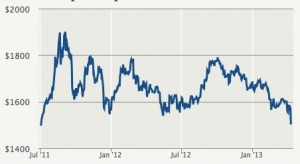 Gold appears to have been hit by three factors. Firstly, the US dollar is stronger on speculation that the Federal Reserve could end quantitative easing by 2014, and secondly, adverse comments by analysts, particularly Goldman Sachs, advised clients last week to short gold, lowering its 12-month forecast to $1,390 from $1,550, according the Telegraph.

But thirdly – and maybe the primary catalyst for the fall – the ECB has agreed, indeed encouraged, Cyprus to sell its gold reserves to help fund the island’s bailout.

Cyprus holds 13.9 metric tons of gold, in itself not usually a market moving quantity, but if Cyprus is forced to sell the family silver to pay its way, the markets are speculating, “who next”?

Large-scale sales by any of these three would have a major impact on gold supply, but the prospect of what could happen with Italy is what frightens the market.

Nor has it just been the spot price that has seen falls: gold and silver ETFs have seen a sharp outflow of funds with SPDR Gold Trust, the world’s largest gold-backed exchange traded fund, losing nearly 20 tons late last week.

The silver price has followed gold down, although not as sharply.

All eyes will be on the market this week to see not if, but when, Goldman’s forecast of $1,390 is breached.