Time to Review the US Strategic Minerals, Metals Supply Chain

An intriguing report entitled the “Strategic and Critical Materials 2013 Report on Stockpile Requirements” throws a spotlight on weaknesses in the supply chain for strategic metals needed by the US military and associated industries.

At present it should be said that the US is not facing shortages of critical metals, but much fear was raised over an over-reliance on Chinese supply sources for rare earth oxides a couple of years ago – a media frenzy that was seen by many as a means to drum up support for the re-opening of Mountain Pass.

While Mountain Pass cannot on its own supply the whole US demand for REEs, it is probably now sufficiently operational to meet the acute needs of the military and its supporting industries in times of crisis, so maybe all that hype proved worthwhile.

But the SCM report points to a great many more metals for which the US is said to be vulnerable, should foreign sources of supply fail to continue delivery of raw material.

Such potentially unreliable supply sources range from those with unstable regimes to those outwardly hostile to the US, and a number of scenarios could be envisioned in which a supplier cuts off or restricts shipments at short notice if internal law and order broke down, or if external geopolitics suggested it was in their interests to do so – such as China’s recent restriction on rare earth exports to Japan following their spat over some minor rocks in the South China Sea.

A graph from the report identifies the greatest risk to be for, of all things, tin. 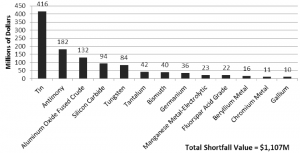 Source: US Department of Defense

Tin is, as we know, mainly used in solder, so that means it’s a crucial constituent for the electronics industry. Antimony is more esoteric; around 50% of pure antimony is used for hardening lead, to make alloys which are then used mostly in batteries. However, the hardened alloy also finds use in small arms bullets and tracer rounds, hence the interest for the military and, in super-pure form, in semiconductors.

How can you be sure the metals you buy don’t contain tungsten from the Congo?

The next two come under the heading of abrasives of one sort or another: aluminum oxide-fused crude and silicon carbide, while tungsten is used in machining as cemented carbides in the form of tungsten monocarbides and as a hardening alloy additive for making tool steels, high-speed steels, and creep-resistant steels and alloys – again crucial for the military industry.

PREVIOUS POST:
Vedanta Resources: High on Oil and Gas; Low on Iron Ore, Copper and Zinc
NEXT POST:
Cash Price of Aluminum Up After Two-Day Decline