For example, one clear beneficiary already has been the rail-freight business with the likes of Canadian Pacific and Union Pacific gaining from a significant increase in volumes of crude oil and petroleum products.

With the shale reserves often found in areas without existing pipeline infrastructure, the railways have stepped in to the breach and profited as a result.

But five or 10 years from now, once infrastructure is built along major trunk routes, liquefied natural gas could significantly reduce the cost of road haulage, driving sales for firms like Cummins, who is pouring considerable resources into natural gas-powered engine development and manufacturing capability. Likewise, steel firms could benefit enormously from lower energy costs, but some could benefit more than others. 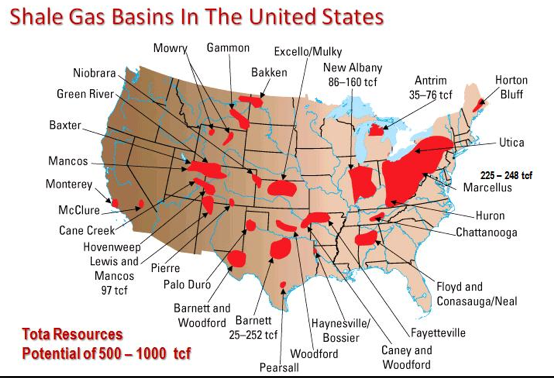 The Barnet and Eagle Ford shale gas deposits are relatively close to refining centers, making their product readily accessible to the Gulf Coast and Texas petrochemicals industry, but many deposits are not so conveniently positioned. Bakken, straddling the Canadian border, and Mancos-Niobrara, straddling the Utah-Colorado border, are better sited for serving local needs such as they are.

Could we see the likes of Nucor, Gerdau and Steel Dynamics expand operations in such locations on the basis of long-term energy deals?

Producers with many production facilities in diverse locations may benefit more than those concentrated in just one or two sites, unless they are lucky enough to be close to a deposit. The size of the Marcellus and New Albany resources will certainly have an impact on energy-consuming industries in the northern Midwest and Northeast; will this reverse the trend of recent decades to site new facilities in previously rapidly expanding southern states?

Plants like US Steel’s massive Gary Works probably already have a new lease on life accessing energy at well below the international market level, but will that mean the likes of US Steel will favor future investment in plants like this?

Energy can be transported, whether it is in the form of natural gas, or oil, or converted into electricity, but infrastructure is costly and is either lacking or needs upgrading (as we have seen) with renewable technologies such as wind farms. Industries that are sited close to abundant natural gas reserves or are willing to locate adjacent to them will reap the greatest rewards.

Picking the winners and losers from such a fast-changing situation will be challenging, but the effects are already rippling out through the metals industry and will become more profound in the years ahead.

One effect that will be welcome by all is that the slow manufacturing decline relative to overall GDP – seen in the graph in the first part of this article – is already beginning to turn, and the process has only just begun.