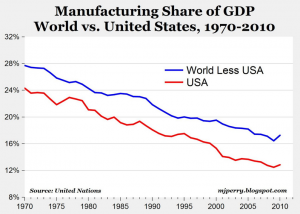 Taken at face value, the decline appears inexorable, but when tracked as this one is, i.e. against world manufacturing, it can be seen that the US really only matches the mature world economies’ rise in the service sector as a proportion of GDP.

Even more encouraging is this next graph of US manufacturing, which shows that, far from decline, US manufacturing has grown over the decades even if its rise has not kept pace with the increasing role of the services sector: 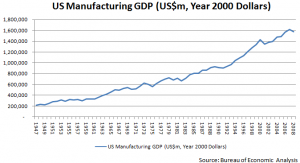 So before we all slit our wrists in the manufacturing sector, let’s take some comfort in the fact that US industry has held its own in an increasingly global environment and has plenty of scope to continue to expand in the future.

An intriguing article in the Telegraph by Tom Stevenson, an investment director at Fidelity Worldwide Investment, discusses not the ongoing health of US manufacturing, but the once-in-a-lifetime game-changer that low energy costs could be providing for the US over the next 10 to 20 years.

There has been a lot of media coverage on the impact that shale natural gas and oil supplies could have on the US economy, but Stevenson draws a cute analogy with the California Gold Rush, saying the real fortunes weren’t made by those panning for gold, but by those selling picks and shovels to the prospectors.

In particular, Levi Strauss jeans grew from the same humble beginnings to become not just a household name and multibillion dollar turnover business, but an icon of the USA to the point that Levi jeans were almost a tradable currency in Eastern Europe during the days of the Cold War.

The point of Stevenson’s musings is along these lines: that while low energy costs will likely raise all boats in the US economy, it will raise some more than others. That is true among the metals industry as much as any other sector, and not always in the most obvious way or at the same time.