In the fourth quarter of 2012, India’s economy grew only 4.5% due to the widespread weakness in farm, mining and manufacturing output, according to Trading Economics: 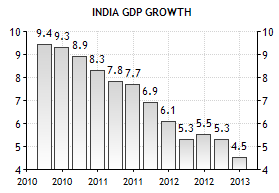 Manufacturing, normally a powerhouse of emerging economies, showed output growth of only 2.5%, while the mining sector reported an annual fall of 1.4%. Farm output gained 1.1%. Only construction expanded at a respectable 5.8% with financing, insurance, real estate and business services (where government regulation is not so restraining) growing 7.9%.

A large part of the problem is lack of investment by Corporate India, which is held back by uncertainty over the upcoming elections due by April 2014.

Boosters claim falling oil and commodity prices and an expected drop in interest rates (recent research from Goldman Sachs shows a historically strong connection between lower rates and higher industrial production) will result in a pick-up of activity this year, but leading industrialists appear less than convinced.

With the exception of some industries like petrochemicals and refining, where Reliance is planning a $27 billion investment over four years, most corporations are sitting on their hands. Glacially slow reform is matched only by the authorities’ unpredictable reaction to events such as the Supreme Court’s shutdown of Goa and Karnataka’s iron ore exports following revelations of widespread corruption and illegal mining.

A change of government in the upcoming elections is also a possibility, adding yet more uncertainty to the regulatory environment. Contrary to the gung-ho investment climate of a few years ago, experience has tempered many industrialists’ approach. As the head of one of India’s most prominent industrial groups is quoted in the FT as saying: “Now we know the risk is that if you don’t get just one of the 100 permits you need, everything stops. So now you don’t start until you are sure you have all 100.”

At present, this mostly means they don’t start at all.

Slower growth has led to consumer caution, which in turn has fed back into slower growth. India’s automotive industry, for example, faces further production and price cuts after the weakest monthly sales figures for more than a decade.

Sales fell 26% year-on-year during February, according to data from the Society of Indian Automobile Manufacturers, and both domestic and foreign carmakers are experiencing a drop in sales, according to the Times of India, leading to announcements of reduced production and investment.

Will growth pick up after the election? Many hope so, but much will depend on who gets in and crucially how much of a mandate they have for change.

India’s chaotic coalition politics are not conducive to decisive government – the one quality the potentially dynamic Asian economy needs.