Data released by various state bodies in China contrasts with that published by the World Steel Association (WSA), recently highlighting how even in a depressed market, China’s steel producers have continued to boost production year on year while (much of) the rest of the world falls.

Firstly, the WSA report for March shows the rest of the world has been contracting. Europe was down 6.6%; the CIS was 4.5% lower; North America fell 6%; South America dropped -7.8% with only Japan and India showing any gains among the major producing countries outside of China. 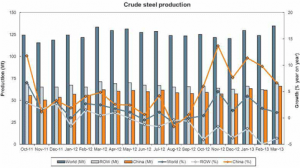 According to a Standard Bank note to clients, the government’s China Federation of Logistics and Purchasing PMI reading eased from 50.9 in March to 50.6 in April. New orders fell from 52.3 to 51.7, largely due to export orders dropping from 50.9 back into contraction territory again at 48.6.

PMIs for the steel industry were not any better. This week’s official steel manufacturing sector PMIs remained firmly in contraction for the second month in a row, suggesting the worst conditions witnessed since last July-August’s massive destock. April’s contraction in steel activity, however, saw slightly improved momentum, shifting up from 44.6 in March, up to 45.1; implying, the bank says, that the worst of this year’s downstream destock might be over.

China’s steel output PMI fell from 45.7 to 44.9, suggesting some weakening in production rates, while finished goods fell from 58.9 to 49.0.

Underlining the fact services are now said by the PBOC to be larger at 47% of GDP than manufacturing in China, power consumption grew while manufacturing activity has stalled. Electricity production in Q1 is said to be up 4%, with the China Power Association predicting a rise of 8.5% in 2013 over 2012.

Services includes construction, where new home sales and resales have fallen in response to recent property curbs, down 57.3% and 88.1% respectively in Beijing, according to Standard Bank. Not surprisingly, finished steel prices are down and inventory continues to be run down as well, but the bank believes this is close to running its course and we could see an uptick soon.

Threats by Beijing that CISA and the Ministry of Environmental Protection have teamed together to root out the steel industry’s chief polluters in an effort to clean up pollution are not causing anyone too much concern, given China’s steel industry has installed capacity of >1 billion, relative to output of about 750 million tons; any cut to steel capacity or steel output forced upon “the polluters,” the bank believes, will quickly be filled by alternative producers, should market demand allow.

For now, both domestic Chinese steel prices and seaborne iron ore prices probably have further downside. When the trend reverses will depend on the domestic construction market and international export markets – the former is, for now, looking a more likely source of salvation than the latter.