Australia's Iron Ore Boon is Europe's Curse, and It's All China's Fault

Iron ore prices have been sliding in China, the TSI reports in its recent Monthly Iron Ore Review, with the firm’s own benchmark for 62% Fe slipping 1.8% from its March level to US $137.39/dry metric ton.

Yet demand has been strong – remarkably strong when one considers the Chinese steel industry is going through a de-stocking cycle.

According to Reuters, Australia has never shipped as much iron ore to China as they did in March, up 36% and boosting the country’s trade account into surplus after 14 months of deficits. Meanwhile, for fines in Brazil (where, according to the TSI, many contract prices are now based on the spot price average for the current quarter), FOB prices are down 7.3% in Q2 over Q1.

PMIs such as those produced by HSBC during the first quarter have been only just in positive territory. April was 50.4 compared to March at 51.6, suggesting end-user demand is not strong, so the resilience of steelmakers’ production levels can either be seen as excessive – or they know something we don’t.

Construction data has been weak, although new building license applications in Beijing were up in Q1, but land sales across the country contracted by 20% year-on-year. Chinese port stocks of iron ore are down, as this graph illustrates: 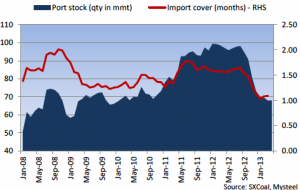 Yet steel production has continued to rise since the beginning of the year, as this chart shows: 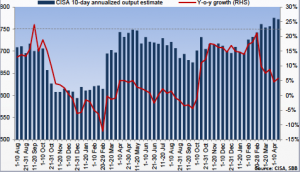 In spite of rising production, overcapacity is widespread, with over 90% of Chinese steelmakers reported by TSI to be losing money.

Prices of finished steel have continued to slide over the period, now nearing the dips last seen in the late summer trough of the last de-stocking cycle. Does this mean we are approaching the bottom in Chinese prices again and they are set to rise?

Much will depend on demand. Overproduction has flooded both domestic and export markets, with finished metal contributing to a surge in EU imports of Chinese steel products, according to Platts. The firm cited Europe’s steel association, Eurofer, as reporting that during Q1, steel imports from all non-EU-member countries were up 21% year-on-year.

While China, Russia, Ukraine and Turkey remained the largest exporters to the EU, Chinese coils stood out, with HRC up 500% year-on-year, and CRC and HDG up 80% year-on-year, calling for action by those parties most impacted by the flood of imports.

Unless demand picks up significantly, or production is cut back, it is hard to see the overproduction and low capacity utilization righting itself in China in Q2 or even Q3. As a result exports could become a problem for some regions this year as China’s massive steel industry seeks to find a home for its surplus production.