Alas, after a good run, Johnson Matthey, one of the world’s leading firms in platinum group metals (PGMs), announced that they’ll no longer be putting out their platinum outlook, called the Platinum Review.

Luckily, we reporters in the metals industry have been able to get our hands on one of the last ones, released last week ahead of JM’s Platinum Week.

The reason for the kibosh is an economic one – Anglo American Platinum (Amplats) withdrew their funding of JM’s research, according to Reuters. JM also has a metal supply agreement with the major platinum producer, albeit on a separate contract. More on Amplats in just a bit.

According to Johnson Matthey’s Platinum 2013 report, platinum supply is forecast as likely to be under pressure from weak margins on the mining side and unstable labor relations in South Africa. (Both platinum and palladium experienced supply deficits in 2012; prices averaged $1,522 per ounce for platinum and $643 per ounce for palladium last year.) 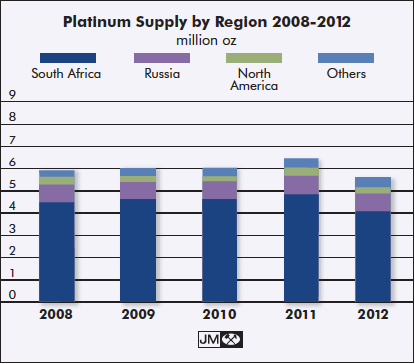 Last week, ETF Securities, a firm offering physically backed platinum and palladium, highlighted how largely they feel Amplats’ moves will figure into the supply-side picture: at the beginning of 2013, Anglo American Platinum, the world’s biggest platinum producer, “announced its intention to close four mine shafts and is looking to sell another mine complex as part of a radical overhaul of its South African operations.”

The planned restructuring could cost the industry as much as 6,000 jobs and 250,000 ounces of production, equivalent to 4 percent of total global platinum supply, according to ETFS. Miner strikes are always an uncertainty in South Africa, and this year is no different – however, just a couple days ago, following a tangible strike threat, workers returned to the shafts and everything proceeded as normal.

Not without a price for Amplats, however; shares of their stock fell to an eight-year low of 286 rand on Thursday, close to half this year’s high of 508.99 rand in January, according to Reuters.

For palladium, Johnson Matthey forecasts that palladium supply will drop, also being hit by unstable primary mine output, with a drop in Russian stock sales to boot. The firm expects sales to slide to around 100,000 ounces this year from 250,000 in 2012. (Norilsk Nickel, the world’s largest palladium producer, had announced that the company expects that lower global supply is likely to push the global palladium market into a 25% deficit in 2013).

While demand for platinum in autocatalysts has been cooling off, palladium demand will only grow – “of all the platinum group metals, palladium has the strongest fundamental outlook,” according to the JM report. “Excluding investment, 70% of the palladium purchase by end-users in 2012 was for autocatalyst manufacture compared to less than half of non-investment demand in 2005.”

The rest of the demand outlook – and specific price forecasts – in Part Two.