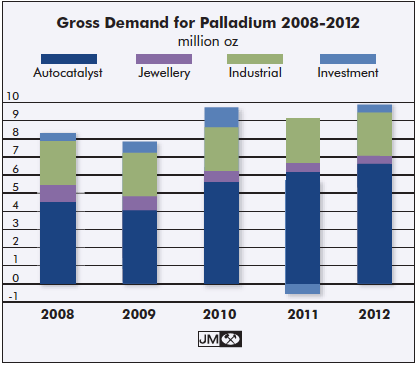 The dark blue bar is expected to grow at an even higher rate in 2013…(Source: Johnson Matthey)

Following a platinum and palladium supply-side outlook in Part One of this article, we began outlining some of the demand drivers for the two platinum-group metals (PGMs) – and according to Johnson Matthey’s recent Platinum 2013 report, things are lookin’ good for palladium.

While the glass industry should mainly drive platinum demand in 2013, JM is expecting the automotive markets (particularly autocatalyst components) to continue driving palladium demand. Interestingly, it appears as though emissions standards will be the key here.

“China 4 emissions standards for gasoline light duty vehicles, introduced for vehicles driven in Beijing from March 2013 and due to be implemented nationwide in later years, will cause average catalyst loadings to rise slightly,” according to the report. The average amount of palladium per vehicle should increase in Russia and Thailand as well.

So What Does This Mean For Prices?

Here’s a historical trend chart for US platinum and palladium prices on the MetalMiner IndX℠: 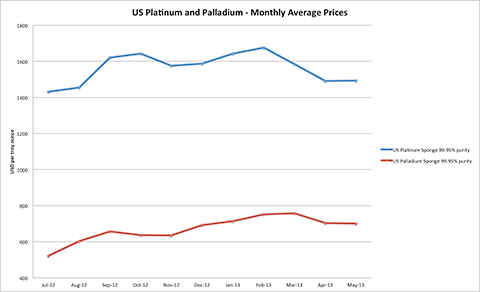 Although we’ve seen a drop and then leveling-off in sponge prices, for example, Johnson Matthey forecasts a brighter upside for the balance of 2013.

All of these outlooks and forecasts notwithstanding, it would behoove any PGM buyers or market watchers to keep an eye on MetalMiner’s Automotive MMI®.

We think we’ve seen a top of the auto market (at least in the US) as of a few months ago, the EU’s auto market is in the crapper, and with China having some trouble spurring consumption domestically (at least as much as they’d like), our price outlook for palladium specifically and the PGM market in general is not quite as bullish. (Of course, JM, as a metal supplier, has a vested interest in higher PGM prices.)

A lot will come down to the automotive markets in China and India, which we’ve seen having their ups and downs the past year or so. Their future sales performance is not as certain as it looked 24 – or even 12 – months ago.