Honda Ltd. Slipping in Supplier Relations, According to New Report

In a recently released annual survey of automotive OEM/supplier relations, the US “Big Three,” combined with Japanese transplants Toyota, Nissan and Honda, received similar scores as last year, “which show no meaningful change except [for] Honda, whose supplier relations continue to slowly drop.”

However, the 2013 results remain considerably lower (ed. note: representing poorer OEM-supplier relations) than the 2004-2007 time period with average scores in the 350-415 point range.

Today, the leaders, Toyota and Honda, have fallen to the 280-300 point range, while General Motors (GM), Ford Motor Company and Chrysler Corp. have moved up to the 250-270 point range.

Lower scores don’t bode well for a number of reasons.

In fact, the study from Planning Perspectives Inc., suggests that from a supplier management standpoint, good to very good working relations create a number of benefits to both OEMs and their suppliers. These include a greater willingness on the part of suppliers to share new innovations and new technologies; greater support to OEMs beyond contractual terms; and greater price concessions and more open communication.

Poor relations, on the other hand, suggest smaller price concessions given to the OEM, less experienced supplier personnel dedicated to the OEM, and an unwillingness on the part of suppliers to provide the OEM with new technologies and “best” ideas.

The study tracks automotive OEM-supplier relations across six different purchasing areas covering 14 commodities. Body-in-White, one of the six areas and one dominated by metals, scored dead last for several OEMs, including Toyota, Honda, Ford and Chrysler.

On the flip-side, exteriors, also relevant to metal supply chains, ranked highest for Honda and Nissan.

John Henke, PhD., president and CEO of Planning Perspectives Inc., attributes Toyota and Honda’s fall (and other auto producers’ stagnation) to a number of factors.

Primarily, the fast growth of Toyota and Honda within the US market, and the increase in the overall size of purchasing staffs, has caused a “considerable drop in Help provided [to] suppliers to reduce costs and improve quality, and in Communication with suppliers relative to 2004-2007.”

This is also coupled with poorer disciplined engineering functions resulting in later (or, in some cases, excessive) change orders, particularly for Ford, Chrysler, GM and Nissan as well as little improvement from Chrysler and GM for the past two years and Ford and Nissan for the past four, “suggesting unfocused efforts to improve supplier relations.”

The study also included the results of the “European 3” – Volkswagen (VW), Mercedes and BMW. BMW would have won the top score and VW the lowest, according to this chart: 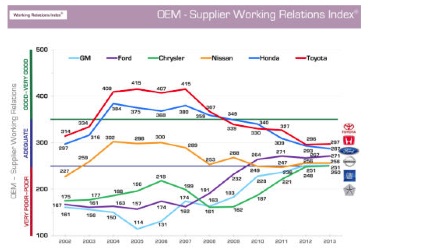