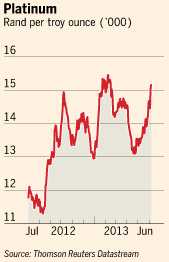 Platinum has not performed well this year. The price has dropped 17% since late February amid concerns about Chinese growth and the Eurozone crisis according to the FT. Falling prices have contributed to poor results at leading precious metals company Johnson Matthey pushing pretax profits 19% below last year’s.

However a culmination of events seems to have spurred a recovery this week with prices increasing by some 5% to over $1,530/oz. Whether the run-up will last remains unclear.

Another article reports that last week a Lonmin employee was shot dead close to the company’s Marikana platinum mine. Police had shot 34 miners last year.  As the mining company increased security around all its mines, investors reacted to the news with a buying spree. South Africa remains far and away the world’s largest platinum producer, accounting for 72% of global supplies, according to the FT. Wildcat strikes have also hit Glencore Xstrata chrome mines in the country in the past week.