The IHS study took a global approach, whereas the above referenced study only involved US OEM-supplier relations.

BMW and Porsche became the customers of choice for suppliers despite an increased emphasis on price reductions (a shift for the premium OEMs). Toyota and Mercedes also fared well in the rankings. 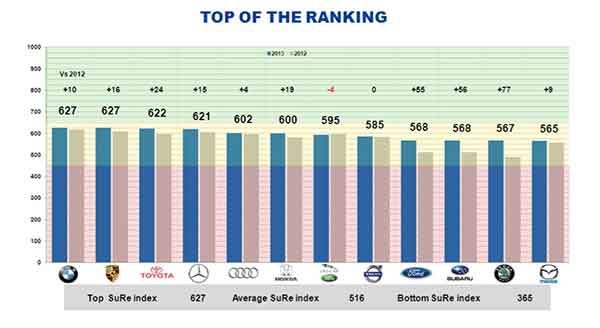 What role does price pressure play in the current picture?

“It is clear that as premium OEMs start to see their profit dip, they will push suppliers to deliver critical savings to prop up their bottom lines. What matters is the magnitude of the purchasing savings they try to achieve and whether suppliers are supported in finding ways to achieve these savings or they are asked to achieve them single- handedly,” said Matteo Fini, author of the study and senior consultant at IHS Automotive.

Ironically, Fiat and Nissan scored more favorably to suppliers on “profit potential,” as they appeared less price-focused than previous studies. Meanwhile, BMW and Mercedes both appear more aggressive with regard to securing critical savings. The study’s author points out this gap between the “best” and the “rest” has narrowed.

Like the previous study reported on by MetalMiner, body-in-white received lower rankings from suppliers, meaning less collaboration exists between OEMs and suppliers.

On the flip side, “Ford shows bold commitment to improving supplier relations, with a few interesting initiatives reinforcing the idea that it is trying to establish relationships for the longer-term, one being pre-sourcing for performing suppliers,” Fini said.

Meanwhile, GM and Chrysler have attempted to address the weaker aspects of relations with suppliers, but both “appear weak in giving credit to suppliers’ cost reduction efforts.”

Fiat and Volkswagen earn the dubious distinction of serving as “most demanding” in terms of price reduction. Meanwhile, the Chinese OEMs have quite a bit to learn on strong supplier relations’ potential impact on the bottom line.

“Geely is among the most technically capable OEMs in China, but seems less concerned about establishing good relations with suppliers when compared to other developing Chinese OEMs,” says Fini.

How the Study Works