Are China’s banks going the same way as America’s five years ago? It’s not an idle question.

China has been an engine of global growth for the last 10 years, and although growth is slowing in percentage terms, 5% growth today is worth 10% ten years ago when the economy was half the size, so even a slower China is an important China.

A banking collapse would bring growth to a crashing halt and would have serious consequences for the wider global economy, just as the Western banking crisis did in 2008/9. Bank lending has been rising much faster than growth in GDP, says the Economist, suggesting that much lending is not helping the real economy, but financing the purchase of existing assets, bidding up their price: 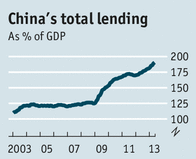 Property prices, especially in coastal cities, have also been soaring, says the paper – sound familiar to the US, pre-2008, anyone?

Whether this was the spur that prompted Beijing to cause a vicious spike in interbank rates last week is uncertain. As with so much in Chinese public policy, much is not commented on officially, and when it is, you don’t know whether to believe it.

However, the result of the PBOC refusing to provide liquidity to the overnight market had a dramatic impact – interest rates spiked as short-term borrowers had to compete for limited funds.

One benchmark, the Shanghai Interbank Offered Rate, or SHIBOR, peaked on June 20 at 13.4% for overnight loans. Another rate hit 25% during trading as shares plunged, the Shanghai Composite index falling 5.3%. 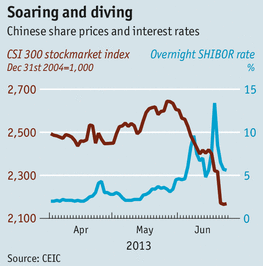 So what does this mean?