Home | Global Trade | Why CIVETS (No, Not Mammals; The Nations) Will Drive Economic Growth
Market Analysis

Why CIVETS (No, Not Mammals; The Nations) Will Drive Economic Growth

Reports that we are at an end to the supercycle in commodity prices are now becoming widespread – which we noted last week. Slower Chinese growth goes the theme, coupled with significant investment in new mine capacity in recent years, and that means the supply crunch is over.

This supposes global growth will be slower from here onwards and indeed we have seen a marked slowdown in China and other emerging markets, coupled with a recession in Europe resulting in lower global growth as a trend over the last 12 months or so.

But that does not mean growth in the emerging markets, known as the E8 markets, has ground to a halt.

Compared to mature G8 markets’ growth, the emerging markets are still robust, and a recent report by the Economist Intelligence Unit (EIU) provides a short yet succinct summary into what that well-renowned publication expects for global growth in the next few years and the part the emerging markets will play.

In an effort to illustrate the growing contribution emerging economies outside of the traditional BRICs (Brazil, Russia, India, China) will make this decade, the EIU breaks down the growth prospects for the BRICs, the CIVETS (Columbia, Indonesia, Vietnam, Egypt, Turkey and South Africa – mostly large populations, reasonably democratic economies, with good demographic growth potential), and other EMs – which surprisingly include countries like South Korea, which we wouldn’t have considered an emerging market, but for the purposes of this exercise, their contribution has to be placed somewhere. 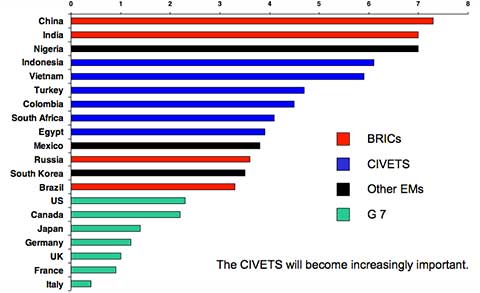 This graph, courtesy of the EIU, shows Real GDP as average annual percentage change and very clearly illustrates the expectation that the CIVETS will provide a significant additional contribution to global growth, beyond the normal BRIC economies we have previously thought of as the engines of growth.