Copper Headed for a Crash?

In technical analysis, Fibonacci retracement is created by taking two extreme points (usually a major peak and trough) on a metal price movement chart and dividing the vertical distance by the key Fibonacci ratios of 23.6%, 38.2%, 50%, 61.8% and 100%.

As you will see from the following graphs, these key points are deemed to be potential turning points or support levels to longer-term wave trends. 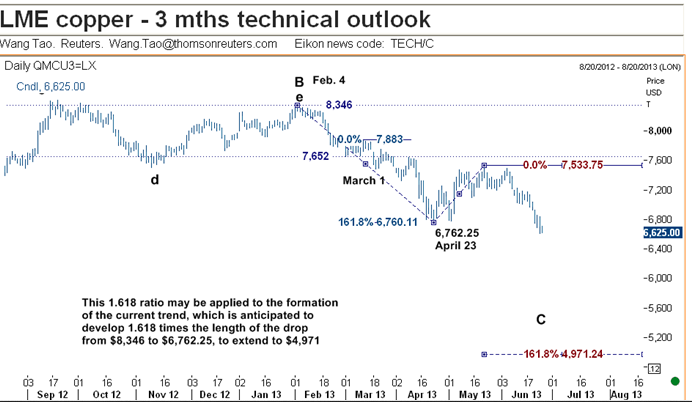 Recent analysis released by Wang Tao of Reuters suggests copper could be headed for a crash, as the long-term wave C trend identified by Reuters started at the Feb. 4 high of $8,346; it is said to be the third and fiercest wave of a three-wave cycle that fell from the February 2011 high of $10,190.

Wang Tao predicts the cycle will reverse a preceding uptrend that rose from the 2008 low of $2,825 to the 2011 high of $10,190…the end of the supercycle, then? Based on his Fibonacci retracement analysis, the cycle may eventually fall to $4,563, the 76.4 percent level as seen on the chart.

Copper is not alone, though.

Aluminum (along with gold, silver, oil, and a range of agricultural products) are all set to fall. 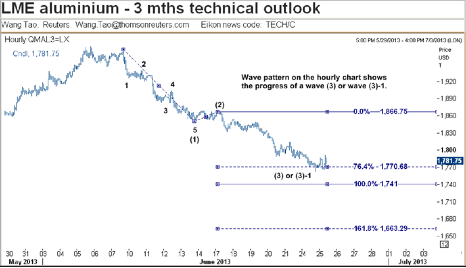 The report is terming the copper demise as a crash, and indeed, both copper and aluminum would be deep into the cost curve if they really did hit those levels by the end of Q3.

We should stress that we are not suggesting buyers plan their H2 buying program on the basis of this analysis, but as one of many different sources of data, Reuters’ report may be worth reading.