From fake knees to models of the Sagrada Familia, 3D printing and additive manufacturing have seemingly taken the industrial world by storm.

Or at least that’s what the industry would like potential customers and users to think – which is what’s worried the industrial manufacturing sector the past couple years.

However, MetalMiner is happy to report that traditional machining and fabrication methods don’t seem like they’ll be going away anytime soon. Why?

First, here are some basics of what we learned at the “Inside 3D Printing Conference and Expo,” which came to Chicago yesterday and continues through today:

The biggest reason that 3D printing doesn’t post a massive threat to traditional manufacturing is that it’s such a niche-friendly process (specialty one-offs in aerospace, medical, etc.), operating (so far) on such a small scale. And scaling up production volume may not be feasible – now or ever.

It all comes down to the raw materials. Solid Concepts Inc. uses primarily stainless steel and cobalt chrome, which are two specialty metals that end up in specialty end-use products. Titanium, as mentioned above, is being talked about, but not being used nearly as much, McGowan said. So what about the bigs, such as aluminum?

Aluminum is also being talked about, according to McGowan, but not used yet at all, since “it’s a dangerous metal to work with, due to the way aluminum powder reacts with air.” (Not to mention, 3D-printed metal products require a greater degree of finishing expertise on the back end.)

Ultimately, McGowan said that as additive manufacturing moves forward, he hears many customers asking when they’ll be able to build larger products. His response to that? “It’s more, ‘how do we think about design for this particular process?’ as opposed to conventional manufacturing processes.” Well, there you go.

In the meantime, please enjoy these photos of the coolest products at the conference: a wonderful large-scale piece of art composed of small-scale, mostly metal objects (and no, they weren’t 3D-printed, not even part of the conference, but a permanent display at the convention center – thanks, McCormick Place!): 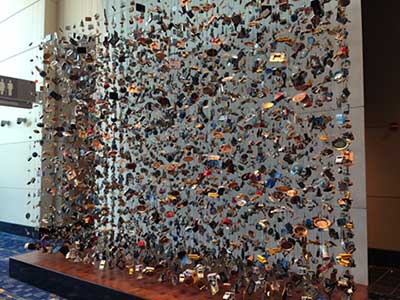 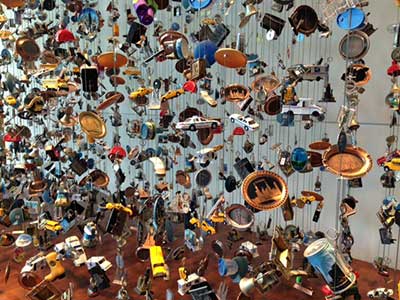