The Steel Index, in their July Market Watch, produced an interesting analysis of the dilemma facing the European steel industry in pricing their products sold to the region’s car companies.

The gist of the paper was that the region’s automotive OEMs are pushing back against the use of raw material escalators in the pricing of the steel products they consume and a review of some alternative approaches that are gradually gaining traction.

Anyone interested in this area should approach TSI directly for a copy of the paper, but here we will shamelessly poach some graphs and data to give you a flavor of what the key takeaways are for MetalMiner readers.

To set the scene, Europe’s automakers are the second-largest consumer of steel products in the EU’s 135-million-ton steel market – at 18%, they are just more than half of the construction sector’s 35%. So not only do they have clout in terms of size, but with the EU steel market contracting from 205 million tons in 2007 to current levels and still falling, the massive overcapacity leaves the whip hand with steel buyers. 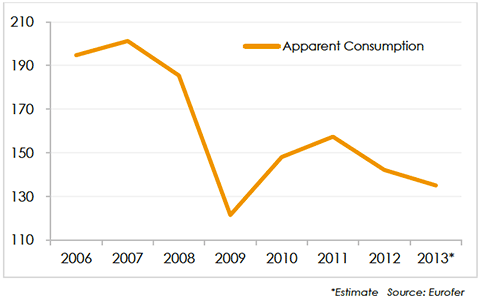 Not that overcapacity is restricted to steel mills; car plants across Europe are being closed too, and that adds to the pressure for those remaining to avoid any cost rises and minimize volatility on inputs.

In recent years, steel products for the automotive sector have generally been priced with a raw material escalator for contracts of more than six months. The TSI says typically this would involve an agreement between both parties that if the average price of the raw material (iron ore) was to change +/-X% (over a quarter), this would be passed onto the end-user.

But as the next graph shows, the iron ore element can be much more volatile than finished steel prices, leaving automakers to push for a return to annual fixed-price contracts, leaving the mills hugely exposed to the raw material cost volatility when their margins are already squeezed to an extreme. 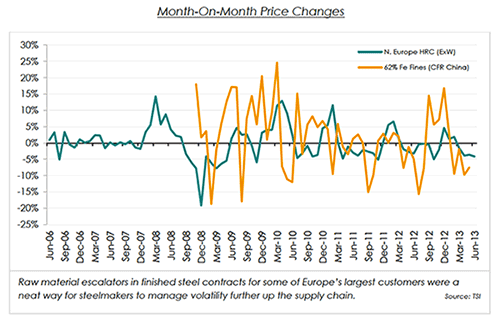 Iron ore spot prices increased 83% between September 2012 and January 2013 and then slid 30% between February-May this year while hot-rolled (HR) coil prices have remained relatively flat.

So what options are steel companies – and automotive manufacturing companies – left with?