Zinc Forecast: Supply to Be Hit by By-Product Prices

Two sources reporting on the same developments in the zinc market come to slightly different conclusions.

Two developments on the supply side are having an impact on availability. Zinc is usually a polymetallic element, occurring with other valuable elements and is rarely mined for the metal alone. Copper and lead are usually produced in conjunction with zinc, and according to HSBC, silver can account for some 40% of the by-product credits. The falling silver price therefore has the potential to significantly reduce the profitability of some zinc mines.

As a result of rising mining costs, falling by-product returns and the low zinc price, HSBC has cut their supply estimate by 120,000 tons in 2014 and 2015, with project deferrals and cancellations raising this to a 644,000-ton reduction by 2016. Certainly, world mine output has slowed sharply this year to just 2.4% from 7.1% last year.

Many analysts point to a massive overhang of zinc concentrates that have built up, partially on the back of reduced Chinese refining capacity, as evidence that supply will remain more than adequate: 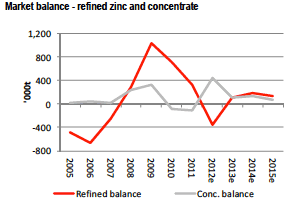 However, the bank reports that Chinese refining capacity has turned around this year, increasing 9.6% in the first five months of 2013. As a result, the bank contends the concentrate surplus will normalize more quickly than previously believed, reducing a source of buffer stock to the market over the coming year or so.

The Big Unknown For Us? Zinc Demand

HSBC points to “rampant Chinese apparent consumption year to date on the back of strong steel production,” saying apparent zinc consumption in the first five months was up by 25%. However, some of this is going into inventory and nearly all sources agree that Chinese demand is slowing, allied to only slowly recovering demand in Europe; from (maybe) 2014 onwards, the demand side looks the most uncertain. 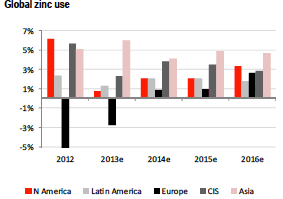 As Andy Home points out, the LME’s falling zinc inventory (in spite of the market being in surplus and likely to remain so through 2015) may not be as simple as rising demand.

Curiously though, HSBC suggests that in spite of the market remaining in surplus, the zinc price will pick up, averaging $2,150/metric ton in 2014, $2304/mt in 2015 and $2617/mt in 2016. While not directly challenging this, Home casts doubt on there being a rise in the zinc price anytime soon, and we would agree.

Sooner or later, mine closures and postponement of new projects – very possibly hastened by weak by-product returns – will constrict supplies, but it could be past the middle of the decade before that becomes significant.

Need accurate non-ferrous metal price forecasts? Get them at our upcoming live event: