Coal was one of the darlings of the commodities super-cycle not so long ago, but its fortunes as a seaborne-traded product – and price forecasts – have been attacked from all sides.

Natural gas released from fracking in the U.S. has decimated the thermal and metallurgical coal market there and encouraged US coal producers to look for exports, which in turn has impacted the European and Asian markets. Demand from the seaborne industry’s two metallurgical coal-consuming behemoths, India and China, have remained robust with India up 6.5% year-on-year and China up 10%, but even so prices have fallen.

As this graph from The Steel Index Monthly Coking Coal Review shows, quarterly prices have halved since the beginning of Q2 2011. 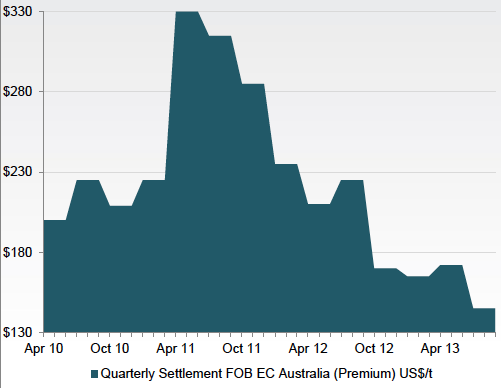 In spite of overall volumes in China and India remaining strong, Q2 has seen weakness as steel mills have run down inventories and sat on the sidelines expecting prices to fall. They have not been disappointed as current spot prices have dropped below the marginal cost of supply.

The reason, though, is not hard to see: the metallurgical coal market is clearly in oversupply.

As HSBC observes in its recent Quarterly Review, there has been strong growth in exports, particularly from Australia, as miners have looked to reduce unit costs by increasing production volumes. Contract prices are now at the lowest levels since 2010, yet steel production is expected to slow in China – and with a weak rupee and slowing economy, demand in India is likely to be weak for the next 6-12 months. Similarly, South Korea and Taiwan are cutting back in the face of weak construction markets (although the Japanese economy is picking up).

HSBC sees about 11% growth in seaborne coking coal supplies this year with at least one-third coming from Australia, but U.S. exports are likely to decline in the face of low global prices and competition from Canadian suppliers into the European market. The bank advises that about one-quarter of low volatile coals and about half of high-volatile coals are thought to be losing money in the U.S. at current prices, suggesting further cutbacks in output are likely.

Going forward, most analysts are expecting the market to remain weak; oversupply, even if partially addressed by cutbacks in capacity, isn’t going to be remedied anytime soon and demand has little reason to rise strongly in the medium term. 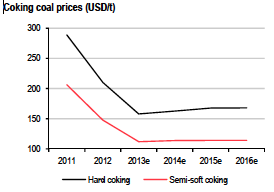 The benchmark price for hard coking coal for the July to September quarter was agreed at US$145/t, HSBC tells us, down 16% quarter-on-quarter, and the lowest price since the quarterly benchmark system was introduced in 2010.

Not great news for the miners, but good for steel consumers as low prices help steelmakers cope with a still-recovering steel market beset with too-low capacity utilization and a weak pricing environment.