Our Idea of a Good Summer Beach Read 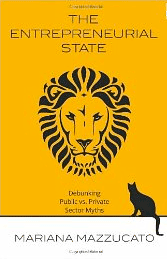 For those of you headed for the beach this month, the choice of what to take with you – and I don’t mean the kids – is often the most challenging issue.

Do you want a good page-turner? Is John Grisham your thing? Or maybe the latest Scandinavian sensation Jo Nesbo and his Harry Hole series? Well, for anyone who can’t quite leave the business world behind, I have something better.

Mariana Mazzucato, building on a report she wrote for DEMOS a UK-based think tank, has brought out an intriguing book entitled The Entrepreneurial State: Debunking Public vs Private Sector Myths. It may sound a little dry, it may sound potentially too liberal for some (or as we would say in the UK, too ‘left wing’), but in fact it is a remarkably good page-turner written from an analytical and neutral point of view.

Mazzucato is well-qualified to write on the topic. A Sussex University professor of economics who specializes in science and technology, she asks the question, what role does the state have in innovation and are we in danger of losing our ability to innovate if we do not recognize the role the state has in this most fundamental engine of growth?

The level of innovation in an economy determines the growth in output, which in turn determines living standards. The US has long held the reputation as being the world’s most innovative and entrepreneurial economy and, as a result, it has enjoyed a high standard of living while retaining its position as the world’s most powerful political, military and economic power.

Mazzucato argues that the US, and other countries from which she cites examples, achieves this not because of small government and a highly entrepreneurial business culture, but in part the exact opposite: because the state has taken on the risks in research and development that private enterprise is not willing to take on.