Even though new power plants being built in China’s Xinjiang region (to exploit low-cost coal) are attracting aluminum smelter investment and ensuring output will actually speed up in the second half of 2013, capacity utilization is lower than in the West: 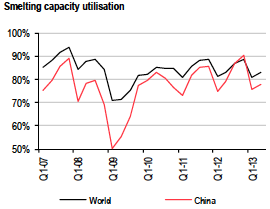 This ensures, along with low metal prices, that smelters are on razor-thin margins.

But rather than adding to a mountain of metal as in the West, inventory of aluminum ingots in four major industrial cities — Shanghai, Wuxi, Nanhai and Hanzhou – actually fell to about 740,000 tons recently, from a record of 1.234 million tons in March.

Consumption is said to be up 10% this year, with one semi-finished-product manufacturer saying it planned to double capacity to consume over 2 million tons per year of primary metal. Reuters reports sources suggesting consumption may hit 24.5 million tons this year, which would be a 12.5 % increase over 2012, yet exports even of downstream product have increased by barely 100,000 tons since 2010, as this graph from HSBC shows: 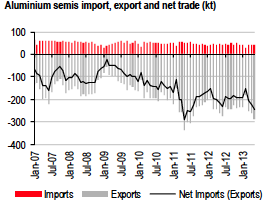 The phenomenal rise in smelter production has been matched by an equally staggering rise in downstream semi-finished processing investment. Production of flat-rolled and extruded products has increased dramatically over recent years and holds worrying implications for a medium-term slowdown in Chinese demand – all that production capacity is going to find a home for its product; if not at home, then overseas.

For the time being, though, China continues to consume the primary metal coming from this new production capacity. In spite of Beijing’s efforts to close less-efficient or polluting pot lines, the reality is that new capacity will continue to outstrip closures for the foreseeable future – certainly while demand continues to grow.

Let’s hope domestic ingot prices remain at or above Western levels to limit the damage to U.S. and European producers that a flood of cheap semi-finished products would bring. Much as Western consumers would welcome lower-cost semi-finished products, Western industry needs healthy, high-quality local producers.

A bit of Chinese competition can cap prices; too much could decimate local supply.

Looking for accurate 2014 aluminum price forecasts? Get them at our upcoming event – click below: