China, if not often blamed for the global aluminum market’s ills, is at least mentioned in the same sentence every time overcapacity and metal surpluses are discussed.

The implied point is the growth in Chinese aluminum production is way beyond what is required by the world’s second largest economy and, like steel, is contributing to the low global prices and massive global stocks estimated to be some 10 million tons. In reality – and unlike steel – China’s aluminum market exists in something of a vacuum.

That is not to say that the rest of the world is completely insulated by what happens in China, but so far the lack of export rebates has kept Chinese primary metal at home.

Indeed, the higher ingot price in China has even limited exports of downstream semi-finished products to some extent (more on that later). The intriguing point to us is that in spite of rampant investment in new capacity, the surplus has remained relatively stable as demand has continued to rise.

This graph from HSBC’s Quarterly Review shows Chinese supply growth can be seen to track demand quite closely: 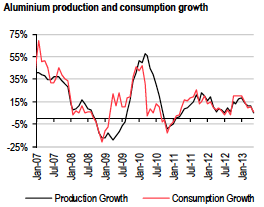 A recent article in Thomson Reuters contains some revealing statistics. According to data reported by Reuters, China currently has more than 27 million metric tons of annual capacity, yet about 10 million tons of new capacity is being built, according to a report from the Ministry of Industry and Information.

Analysts expect China to add more than 3 million tons of new aluminum smelting capacity this year alone, with the bulk coming from the northwestern remote region of Xinjiang.

What does this mean for the aluminum market forecast? Read on in Part Two.