The 2014 ferrochrome price forecast may have something to do with a quiet milestone that was passed this year (and I don’t mean my birthday): China overtook long-term global ferro-chrome production leader South Africa as the world’s largest producer.

True, a large part of China’s import of chrome ore came from South Africa in the first place. South Africa exports were up 48% to 3.1 million tons in the first half of this year, but a number of factors have converged to support China’s rise as the dominant producer in yet another metallic category.

First and foremost, as with so many other metals, let’s talk domestic Chinese demand. Stainless steel demand has been lackluster in most parts of the world, but not so in China.

HSBC reports in its latest Global Metals & Mining Quarterly Review that stainless production in China was up 26% year-on-year in the first four months of 2013. Although growth is slowing, it still continues and production for the year on the whole should still be up a remarkable 14%, the bank’s analysts believe, as slowing GDP growth being counterbalanced by rising intensity of stainless use in just about every walk of life.

Stainless isn’t the only use for ferro-chrome, but it does consume some 85% of production and strong Chinese demand will see global consumption rise about 6.5% in spite of mediocre demand increases outside of the country. 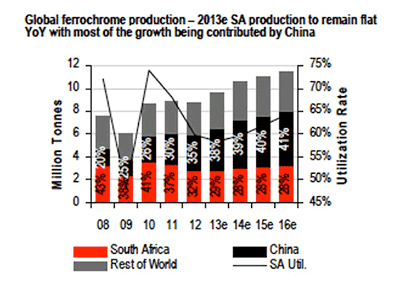 The challenge for South Africa continues to be power supply.

Production curtailments as a result of power problems have been a feature of South African production for several years now and will continue this year and next, especially during the winter period when tariffs rise, HSBC reports. South Africa will remain a significant producer, but as new mines come on-stream, such as Glencore’s Lion, ENRC’s Aktobe and Outokumpu, supply will rise between 2012 and 2016 with a compound annual growth rate of 6.8%.

The market is currently in deficit, the bank estimates a marginal 89,000 tons, but as new projects come on-stream this will likely move into surplus depressing rises in contract prices.

What Is the 2014 Ferrochrome Price Forecast?